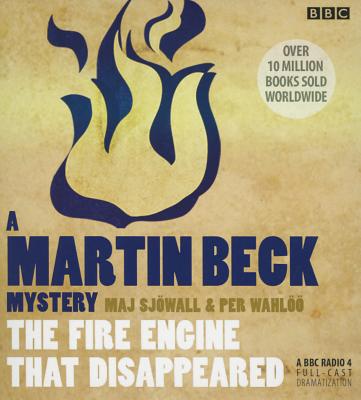 This is book number 5 in the Martin Beck Police Mysteries (Audio) series.

Steven Mackintosh stars as Martin Beck, with Neil Pearson as Lennart Kollberg, in this BBC Radio 4 dramatization of "The Fire Engine that Disappeared," translated by Joan Tate and dramatized by Katie Hims.

In "The Fire Engine that Disappeared," adapted from the fifth book, the apartment of a suspect being staked out by Beck's team explodes, killing three people. Arson and murder aren t at first suspected, but it soon becomes clear that the fire was started on purpose.

The Martin Beck books are widely acknowledged as some of the most influential detective novels ever created. Written by Swedish husband and wife team Maj Sjowall and Per Wahloo, the series set a gold standard for all subsequent Scandinavian crime fiction. Before Kurt Wallander or Harry Hole, Beck was the original flawed policeman, working alongside his colleagues to uncover the cruelty and injustice lurking beneath the surface of Sweden's seemingly liberal, democratic society.

This feature require that you enable JavaScript in your browser.
END_OF_DOCUMENT_TOKEN_TO_BE_REPLACED

This feature require that you enable JavaScript in your browser.
END_OF_DOCUMENT_TOKEN_TO_BE_REPLACED

This feature require that you enable JavaScript in your browser.
END_OF_DOCUMENT_TOKEN_TO_BE_REPLACED