A Bridge to the Stars (MP3 CD) 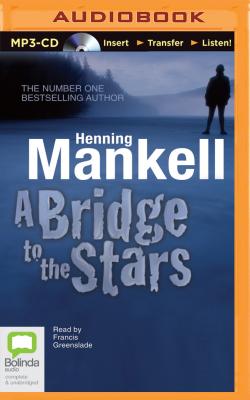 A gripping young adult story about a teenager's life in Northern Sweden from the bestselling author of Before the Frost, Henning Mankell.

While looking out his window late one misty night, Joel sees a lonely dog in the street. He spots the animal again and begins sneaking out night after night, trying to find it. During these nocturnal outings, Joel discovers aspects of his life he has never imagined.

A Bridge to the Stars is a magical mystery that leaves the reader spellbound and full of hope for Joel and his father's future.

'One of the world's leading authors has written a moving story about a teenager's life in Northern Sweden.'
Publishing News

'The Nordic King of the European thriller writers.'
The Observer

'This is a deep, serious story, written with the lightest of touches and no hint of condescension. Mankell pays his readers the compliment of taking them seriously and the Joels among them will respond to this philanthropist - one who literally likes his fellow humans.'
The Guardian

'Henning Mankell, prize-winning author of the Inspector Wallander series, has a winner with his first novel for young adults. Francis Greenslade narrates the story of 11-year-old Joel and his father, who live in the cold, desolate forests of northern Sweden. In spite of Samuel's abandonment of the sea to make a life as a tree cutter, Joel's mother deserted the family. Greenslade's Australian accent adds to the surreal atmosphere, making Sweden's dark and desolate winter a character. You feel the loss, loneliness, and confusion that send Joel out searching for a dog he has spotted from his window. And you'll feel the coldness of the Swedish winter that has penetrated Joel's heart begin to thaw as spring slowly warms his heart and his life.'
AudioFile Magazine

'Touching tale of a young boy growing up in northern Sweden.'
The Bookseller

This feature require that you enable JavaScript in your browser.
END_OF_DOCUMENT_TOKEN_TO_BE_REPLACED

This feature require that you enable JavaScript in your browser.
END_OF_DOCUMENT_TOKEN_TO_BE_REPLACED

This feature require that you enable JavaScript in your browser.
END_OF_DOCUMENT_TOKEN_TO_BE_REPLACED