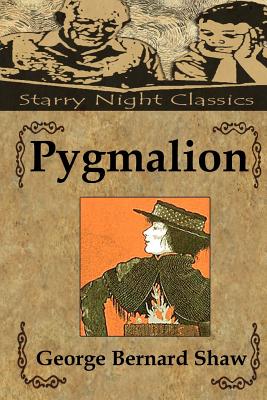 By Richard S. Hartmetz (Editor), George Bernard Shaw
$8.00
usually available in 3-7 days
(This is a special order book which cannot be returned.)

The ancient Greeks had a legend of a sculptor who created a statue so beautiful that he fell in love with it, which eventually came to life. George Bernard Shaw creates a similar story, the basis for the musical "My Fair Lady," in which Professor Henry Higgins tutors Eliza Doolittle, a young flower girl, making her into a lady, then finds himself falling in love with her. Join us for a witty, acclaimed, comedic play that is brilliantly written; a true Cinderella story.

George Bernard Shaw was born on July 26, 1856 in Dublin, Ireland, the only boy among two sisters. His father was a poor grain merchant and his mother, a professional singer. He attended three different elementary school, developing a strong hatred of schools, suggesting that they were little more than prisons to keep children from disturbing their parents. He also considered the curriculum useless and crushing to creativity. When he was sixteen, his mother left to join her voice teacher in London, taking his sisters with her, but leaving George with his father to work as an office clerk. Four years later he joined them in London, ghostwriting the music teachers column. Shaw spent much time in libraries and museums, studying and writing novels, all of which were rejected. In 1884, he became a Socialist. He married Charlotte Payne-Townshend, a fellow Socialist in 1898, although he had a number of affairs with married women. By the 1890s, Shaw's plays were becoming popular, and he wrote 63 of them. He was also a prolific novelist and critic, winning the Nobel Prize for Literature in 1925. When he was 91, he joined the Interplanetary Society, to which he belonged until he was 94. On November 2, 1950, Shaw fell while pruning a tree, causing injuries which resulted in kidney failure. He died at age 94, in Ayot St. Lawrence, Hertfordshire, England.

This feature require that you enable JavaScript in your browser.
END_OF_DOCUMENT_TOKEN_TO_BE_REPLACED

This feature require that you enable JavaScript in your browser.
END_OF_DOCUMENT_TOKEN_TO_BE_REPLACED

This feature require that you enable JavaScript in your browser.
END_OF_DOCUMENT_TOKEN_TO_BE_REPLACED