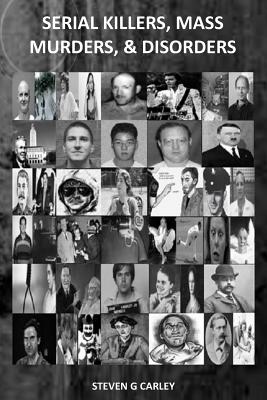 By Steven G. Carley
$24.95
usually available in 3-7 days
(This is a special order book which cannot be returned.)

This book would act as a long drawn out project which over time would reveal pertinent information among certain perpetrators. Serial killers and mass murderers alike tend to be white males. They are usually young but not all, just some are so young the average age drops substantially. Serial killing is often a means of engaging in some sort of sexually sadistic act, but not always. As an example one may point to Harold Shipman (Dr. Death), Ted Kaczynski (The Unabomber), or Herman Mudgett AKA Dr. Henry Holmes who would kill for money more than any other reason. This may make Mudgett the scariest of killers not far behind perhaps the deceitful Mark Barton. The worst may not instill fear, just is the worst in Adam Lanza killing the inhabitants of two first grade classrooms. Whether a mass murder or serial killing the act is horrendous. The serial killer makes the attempt of avoiding capture as his or her in some cases, body count increases. Just as Dr. Harold Shipman would increase his body count to a dreadful 218 deaths. The mass murderer seems to view the act as the last he will ever make claiming his victims and in many cases finishing the job with a self-inflicted gunshot, or in the case of Andrew Kehoe a self-inflicted detonation. The victims of these crimes often go forgotten but the grizzly memories seem to remain with all. Disorders are not always a means of categorizing the psychotic, deranged, and violent. At other times they can and not all these individuals fit the criteria in consideration as a serial killer or mass murderer. Disorders can characterize situations of a neglect toward a child of a parent or recognize the signs of anorexia which in many cases can lead to a person's unintentional death. Disorders can help people deal with personal issues in one's life, or help one to overcome substance and alcohol use or abuse. No one disorder can fit every individual, especially the wide range of behaviors as described within the book.

Steven would grow-up in a small town in Boston, Massachusetts playing with other children in his neighborhood. Steven would lead a mostly quiet life spending much of his time devoted to his studies. Steven would view himself more as a curious person than as a genius. He was born on July 13, 1975, his father was a machinist and mother Beverly was daughter to a machinist. Steven liked running and climbing but most of all he liked collecting, match box cars, baseball cards, muscle men figures, and pretty much anything else he could get his hands on. Steven would grow-up with his two sisters who as mentioned earlier would lead a relatively quiet life. Steven was not a very successful student during high-school and at times would rebel at home by sneaking out of the house at night to join in the endeavors of locals in the neighborhood. Despite Steven's lackluster performance in high-school he would succeed within University of Phoenix receiving a Bachelor of Science degree graduating with honors. During this time Steven would author four works pertaining to his area of study and another on the secrets to self-publishing. He may be most known for his collection of 60+ e-books. He is currently continuing his studies within the IO Psychology Ph.D. program in which he is hoping to complete his Master's degree by 2015 and Doctorate degree by 2018.

This feature require that you enable JavaScript in your browser.
END_OF_DOCUMENT_TOKEN_TO_BE_REPLACED

This feature require that you enable JavaScript in your browser.
END_OF_DOCUMENT_TOKEN_TO_BE_REPLACED

This feature require that you enable JavaScript in your browser.
END_OF_DOCUMENT_TOKEN_TO_BE_REPLACED