We Die Alone: A WWII Epic of Escape and Endurance (Paperback) 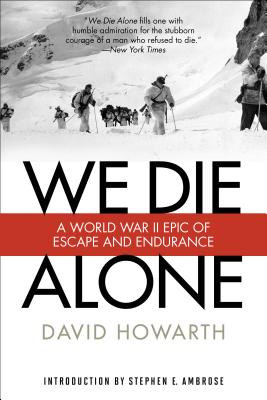 We Die Alone recounts one of the most exciting escape stories to emerge from the challenges and miseries of World War II. In March 1943, a team of expatriate Norwegian commandos sailed from northern England for Nazi-occupied arctic Norway to organize and supply the Norwegian resistance. But they were betrayed and the Nazis ambushed them. Only one man survived--Jan Baalsrud. This is the incredible and gripping story of his escape.Frostbitten and snowblind, pursued by the Nazis, he dragged himself on until he reached a small arctic village. He was near death, delirious, and a virtual cripple. But the villagers, at mortal risk to themselves, were determined to save him, and--through impossible feats--they did.We Die Alone is an astonishing true story of heroism and endurance. Like Slavomir Rawicz's The Long Walk, it is also an unforgettable portrait of the determination of the human spirit.

David Howarth ran a spy ring during World War II. He was also the author of two dozen major books of history.

This feature require that you enable JavaScript in your browser.
END_OF_DOCUMENT_TOKEN_TO_BE_REPLACED

This feature require that you enable JavaScript in your browser.
END_OF_DOCUMENT_TOKEN_TO_BE_REPLACED

This feature require that you enable JavaScript in your browser.
END_OF_DOCUMENT_TOKEN_TO_BE_REPLACED