Gangland Boston: A Tour Through the Deadly Streets of Organized Crime (Paperback) 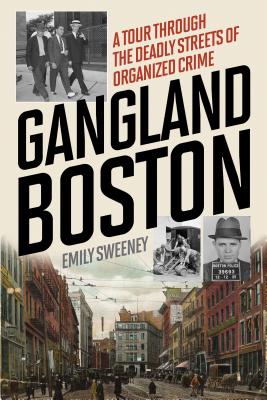 A GUIDED TOUR OF BOSTON'S UNDERWORLD, REVEALING THE PLACES WHERE DEALS WERE MADE, PEOPLE WERE KILLED, AND BODIES WERE BURIED Gangsters have played a shady role in shaping Greater Boston's history. While lurking in local restaurants or just around the corner inside that inconspicuous building, countless criminals have quietly made their mark on the city and surrounding communities. Gangland Boston reveals the hidden history of these places, bringing readers back in time to when the North End was wrought with gun violence, Hanover Street was known as a "shooting gallery," and guys named King Solomon, Beano Breen, and Mickey the Wiseguy ruled the underworld. Drawing upon years of research and an extensive collection of rare photographs, author Emily Sweeney sheds light on how gang violence unfolded during Prohibition, how the Italian mafia rose to power, and how the Gustin Gang came to be. She also uncovers little-known facts about well-known crime figures (Did you know the leader of the Gustin Gang was an Olympic athlete? Or that a fellowship at a major university was named after a big-time bookie?) From South Boston to Somerville, Chinatown to Charlestown, and every neighborhood in between, readers will get to know mobsters in ways they never have before. Readers will find out: * Exact addresses where mobsters lived, worked, and played around Greater Boston * How an Olympic athlete became one of Boston's most notorious gangsters * The untold history of the Gustin Gang * Frank Sinatra's connection to a long-forgotten Massachusetts racetrack * Little-known facts about David "Beano" Breen, Charles "King" Solomon, Harry "Doc" Sagansky, Raymond L.S. Patriarca, and other legendary crime figures.

EMILY SWEENEY has written for the Boston Globe since 2001. A proud native of Dorchester, she's the author of Boston Organized Crime and she appeared in Stranger Than Fiction: The True Story of Whitey Bulger, Southie, and The Departed, a documentary film that is featured on the DVD of the Oscar-winning movie The Departed. Visit her website at www.bostonorganizedcrime.com.

This feature require that you enable JavaScript in your browser.
END_OF_DOCUMENT_TOKEN_TO_BE_REPLACED

This feature require that you enable JavaScript in your browser.
END_OF_DOCUMENT_TOKEN_TO_BE_REPLACED

This feature require that you enable JavaScript in your browser.
END_OF_DOCUMENT_TOKEN_TO_BE_REPLACED