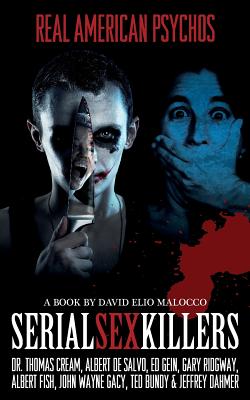 By David Elio Malocco
$14.95
usually available in 3-7 days
(This is a special order book which cannot be returned.)

The American serial killer, Henry Lee Lucas, once grimly proclaimed: "All across the country, there are people just like me, who set out to destroy human life." Every country has serial killers and most of them are never caught. The frightening thing is that you probably know someone near you who appears to be quite normal, friendly, happily married, maybe even with children. But that outwardly normal person could actually be a closet psychopath. The figures for psychopaths are alarmingly one, one in every twenty five people. This meticulously researched book, containing the most up to date information available, provides an altogether intriguing investigation into the dark hearts and twisted minds of the most deviant sexual psychopaths American has ever known and investigates the questions we all want answered. Was Dr. Thomas Neil Cream actually the real Jack the Ripper? Instead of serving the final few years of his prison sentence in Joliet Prison in Illinois, was he, in fact released early and did he travel to London in 1888 to commit the Ripper crimes? Was Albert De Salvo responsible for any of the Boston Strangler murders or is the real Boston Strangler or Stranglers still alive? The book names the two primes suspects, one dead and one still alive. This case is brought right up to events in 2014. Who else was involved with John Wayne Gacy in the torture and murder of several dozen young men? Clearly, he was assisted by associates. Why have they never been charged? How many people did Ed Gein really kill? Was he really insane or was he faking it to avoid execution? Is it possible that Ted Bundy and Gary Ridgway actually killed hundreds of female victims, far more than was previously thought? Will their bodies ever be found Was Albert Fish, who tortured, murdered, dismembered and ate the bodies of little children all across America, the most depraved sexual psychopath ever? How many children did he actually torture and kill, five or one hundred? Read all about them in this fascinating and hugely enjoyable book featuring Dr. Thomas Cream, Albert Fish, Albert De Salvo, Ed Gein, John Wayne Gacy, Ted Bundy, Gary Ridgway and Jeffrey Dahmer and learn about their families, their upbringing, their crimes, their motivations and how they were finally caught. Were they insane or just cunningly evil, depraved killers? Read the arguments for and against in this hugely enjoyable book and make up your own mind about the world's most notorious serial sex killers.

David Elio Malocco was born in Dundalk, County Louth, Ireland. His father was born in Casalattico in Frosinone in Italy and his mother was born in Monaghan in Ireland. He was educated at the Christian Brothers School in Dundalk and his parents later sent him to St. Patricks College in Cavan where they hoped he would be ordained as a Catholic priest. But he chose law and business instead. He received his Bachelor of Civil Law degree from University College Dublin and spent fifteen years as a criminal lawyer before taking a second degree at the Open University, Milton Keynes in England where he obtained a first class honours degree in Psychology majoring in Cognitive Development. In 1991 he realized a personal ambition and moved to New York where he studied film direction, production and writing for film at New York University. Since then he has written numerous screenplays in several genre and has written, produced and directed many shorts and three feature films, Virgin Cowboys, Magdalen and Jack Gambel: The Enigma. Although he has been writing for over twenty years, Serial Sex Killers - Real American Psychos is his first published book. The idea for the book came after he completed dual diplomas in the Psychology of Criminal Profiling and Forensic Science. He later studied creative writing at Oxford University and is presently completing a doctorate of divinity in Metaphysical Science. He is a member of the American Society of Criminology. His first book, Serial Sex Killers - Real American Psychos is part of a trilogy on the psychology of serial killers. His second book, Sexual Psychopaths - British Serial Killers is due for release in Spring 2014 and the final part of the trilogy, Murder for Profit, will be released in the summer of 2014. David is a lifelong supporter of Liverpool Football Club and enjoys filmmaking, writing, making and drinking wine and cooking.. He lives in Malahide, a seaside resort in north Dublin in Ireland with his wife Colette and says he "has no idea what he wants to do when he grows up."

This feature require that you enable JavaScript in your browser.
END_OF_DOCUMENT_TOKEN_TO_BE_REPLACED

This feature require that you enable JavaScript in your browser.
END_OF_DOCUMENT_TOKEN_TO_BE_REPLACED

This feature require that you enable JavaScript in your browser.
END_OF_DOCUMENT_TOKEN_TO_BE_REPLACED