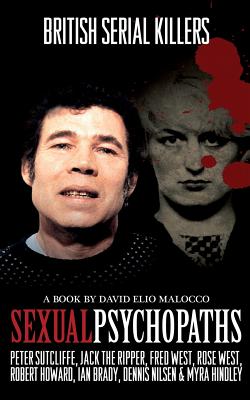 This is an absorbing, compelling and thought-provoking investigation into the minds of Britain's most notorious serial killers which provides the answers to some unanswered questions and raises others never before asked. The author goes behind the published facts to provide a remarkable insight into their crimes, victims, capture, trial and sanity with many never before published facts. Who were the three prime suspects for the Jack the Ripper killings listed in a private memo by the Assistant Police Commission, Melville Macnaghten, and why does that memo exclude one obvious suspect? What role, if any, did American serial killers Dr. Thomas Neill Cream and Dr. H. H. Holmes play in the Ripper killings? What was the true extent of involvement by Myra Hindley in the Moors Murders? Was she really led on by Ian Brady or was she the chief instigator of several murders? Read a transcript of the torture tape and learn how it was consistently misrepresented. Read the evidence which proves that the Yorkshire Ripper, Peter Sutcliffe, deliberately lied when he sought exoneration for his crimes by claiming that he heard voices in his head telling him he was on a divine mission from God to eradicate prostitutes. Should Dennis Nilsen have been found guilty but insane at the time of his crimes and is it now appropriate that he be set free? Who was the significant Satanist involved with devil worshippers Fred and Rose West and why, despite the substantial evidence now available is he and other named people not being prosecuted? Read the defense blunders during the trial which irreparably damaged Rose West's expectations of being acquitted. Just how many young women were tortured and murdered by Robert "The Wolfman" Howard? Read about how he was protected by certain members of the Royal Ulster Constabulary on the basis he was a paid informer. This is a fascinating and comprehensive analysis of Britain's real life serial killers which reads like a thriller, except these crimes really happened.

David Elio Malocco was born in Dundalk, County Louth, Ireland. His father was born in Casalattico in Frosinone in Italy and his mother was born in Monaghan in Ireland. He was educated at the Christian Brothers in Dundalk and his parents later sent him to St. Patricks College in Cavan where they hoped he would be ordained as a Catholic priest. But he chose law and business instead. He received his Bachelor of Civil Law degree from University College Dublin and spent fifteen years as a criminal lawyer before taking a second degree at the Open University, Milton Keynes in England where he obtained a first class honours degree in Psychology majoring in Cognitive Development. In 1991 he realized a personal ambition and moved to New York where he studied film direction, production and writing for film at New York University. Since then he has written numerous screenplays in several genre and has written, produced and directed many shorts and three feature films, Virgin Cowboys, Magdalen and Jack Gambel: The Enigma. Sexual Psychopaths is his second book. The idea for the book came after he completed dual diplomas in the Psychology of Criminal Profiling and Forensic Science. He later studied creative writing at Oxford University and is presently completing a doctorate of divinity in Metaphysical Science. He is a member of the American Society of Criminology. This book is part of a trilogy on the psychology of serial killers. His first book, Serial Sex Killers - Real American Psychos was published in early 2014 and the final part of the trilogy, Murder for Profit, will be released in the summer of 2014. David is a lifelong supporter of Liverpool Football Club and enjoys filmmaking, writing, making and drinking wine and cooking. He lives in Malahide, a seaside resort in north Dublin in Ireland with his wife Colette and says he "has no idea what he wants to do when he grows up."

This feature require that you enable JavaScript in your browser.
END_OF_DOCUMENT_TOKEN_TO_BE_REPLACED

This feature require that you enable JavaScript in your browser.
END_OF_DOCUMENT_TOKEN_TO_BE_REPLACED

This feature require that you enable JavaScript in your browser.
END_OF_DOCUMENT_TOKEN_TO_BE_REPLACED