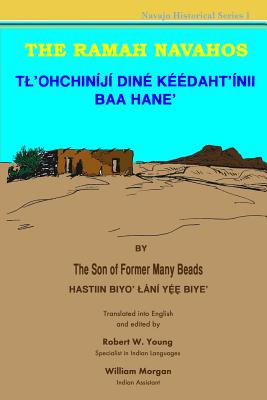 Son of Former Many Beads begins his narration by telling us that his parents had been rounded up by Kit Carson's troops, were driven to Fort Sumner during the Long Walk period and managed to escape from imprisonment to live with the Chiricahua Apaches. He was born among the Chiricahua two years later, and returned with his family to their homeland after the tribe had been released from internment at Fort Sumner. His father, Many Beads eventually moved back to the Ramah area with his family, where they once had lived. His narration spans the time before first contact with the white man, to the thirties of last century, relating the struggle for survival against intruding Mormons, the railroad company and the US government. This interview was recorded in 1930 and written in the Navajo language in 1954 by linguists, Young and Morgan. The English translation follows the original Navajo text sentence by sentence. We gain insight into the difficulties his people encounter to regain the status as rightful residents on their own land.Native Child Din tah is reprinting and creating new editions of historical writings to help preserve and continue Navajo culture, language, and history. This book is a hand-scanned facsimile reprint of the original. When necessary, individual pages have been improved and enhanced for readability. Each book is true to the original work.

This feature require that you enable JavaScript in your browser.
END_OF_DOCUMENT_TOKEN_TO_BE_REPLACED

This feature require that you enable JavaScript in your browser.
END_OF_DOCUMENT_TOKEN_TO_BE_REPLACED

This feature require that you enable JavaScript in your browser.
END_OF_DOCUMENT_TOKEN_TO_BE_REPLACED