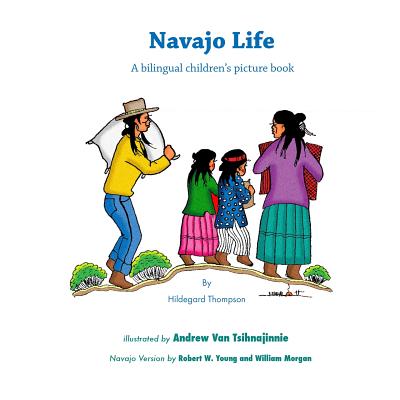 This book tells the story of a Navajo girl named Bah and her brother Kee, beautifully illustrated by Navajo artist Andrew Tsihnijinnie. First published in 1946, it was used in schools and to teach literacy to adult Navajos. It is dedicated to all children, Navajo and non-Navajo alike. The bold and graphic illustrations by Andrew Tsinajinnie reflect Navajo Life of that era. He was already making a living as an artist at the time and was named an Arizona Living Treasure in 1991 . Native Child Dinetah has colorized the illustrations to introduce a new generation of readers to this great artist and children's book. Starting in the 1930s, the U.S. Bureau of Indian Affairs began publishing many collaborations illustrated by Native Americans and largely penned by Anglo writers as bilingual textbooks . They were the first bilingual materials published on any large scale in this country. This was a time of change. The BIA was just beginning to allow Native Americans to speak their own languages, because until then Congress had mandated total assimilation. So the BIA's bilingual textbooks, published under the rubric of Indian Life Readers, was considered revolutionary. This is such a book.

This feature require that you enable JavaScript in your browser.
END_OF_DOCUMENT_TOKEN_TO_BE_REPLACED

This feature require that you enable JavaScript in your browser.
END_OF_DOCUMENT_TOKEN_TO_BE_REPLACED

This feature require that you enable JavaScript in your browser.
END_OF_DOCUMENT_TOKEN_TO_BE_REPLACED