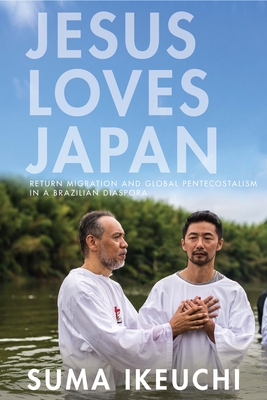 After the introduction of the long-term resident visa, the mass-migration of Nikkeis (Japanese Brazilians) has led to roughly 190,000 Brazilian nationals living in Japan. While the ancestry-based visa confers Nikkeis' right to settlement virtually as a right of blood, their ethnic ambiguity and working-class profile often prevent them from feeling at home in their supposed ethnic homeland. In response, many have converted to Pentecostalism, reflecting the explosive trend across Latin America since the 1970s. Jesus Loves Japan offers a rare window into lives at the crossroads of return migration and global Pentecostalism. Suma Ikeuchi argues that charismatic Christianity appeals to Nikkei migrants as a third culture--one that transcends ethno-national boundaries and offers a way out of a reality marked by stagnant national indifference. Jesus Loves Japan insightfully describes the political process of homecoming through the lens of religion, and the ubiquitous figure of the migrant as the pilgrim of a transnational future.

Suma Ikeuchi is Assistant Professor in the Department of Liberal Arts at the School of the Art Institute of Chicago.

This feature require that you enable JavaScript in your browser.
END_OF_DOCUMENT_TOKEN_TO_BE_REPLACED

This feature require that you enable JavaScript in your browser.
END_OF_DOCUMENT_TOKEN_TO_BE_REPLACED

This feature require that you enable JavaScript in your browser.
END_OF_DOCUMENT_TOKEN_TO_BE_REPLACED