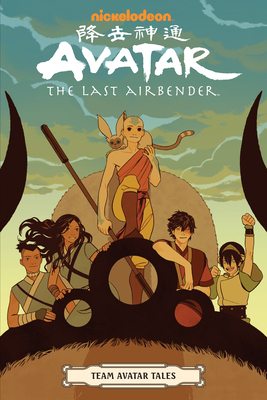 This anthology from the world of Avatar: The Last Airbender features all your favorite characters, brought to life by a cast of all-star creators!

Journey along with Team Avatar as they rescue a pumpkin farmer waylaid by monsters, go undercover in the Fire Nation, help an old rival with a hair-raising problem, and reflect on what it means to save the world. Featuring the work of Gene Luen Yang (Avatar: The Last Airbender--North and South), Faith Erin Hicks (The Nameless City), Carla Speed McNeil (Finder), Ron Koertge (Vampire Planet), Dave Scheidt (Dreamworks Trolls, Wrapped Up), Sara Goetter (Dungeon Critters, Boozle), and more, this anthology features stories both hilarious and heartwarming.

Gene Luen Yang began making comic books in the fifth grade. He has since written and drawn a number of titles. His 2006 book, American Born Chinese, was the first graphic novel to be nominated for a National Book Award and the first to win the American Library Association's Michael L. Printz Award. It also won an Eisner Award for Best Graphic Album - New. His 2013 two-volume graphic novel, Boxers & Saints, was nominated for both the National Book Award and the LA Times Book Award. Gene currently writes the graphic novel continuation of the popular Nickelodeon cartoon, Avatar: The Last Airbender.The Shadow Hero, his comic book series with Sonny Liew, revived the Green Turtle, an obscure 1940s character who is arguably the first Asian American superhero. The Shadow Hero is now available as individual digital issues via Amazon Kindle. The author lives in San Jose, CA.

This feature require that you enable JavaScript in your browser.
END_OF_DOCUMENT_TOKEN_TO_BE_REPLACED

This feature require that you enable JavaScript in your browser.
END_OF_DOCUMENT_TOKEN_TO_BE_REPLACED

This feature require that you enable JavaScript in your browser.
END_OF_DOCUMENT_TOKEN_TO_BE_REPLACED