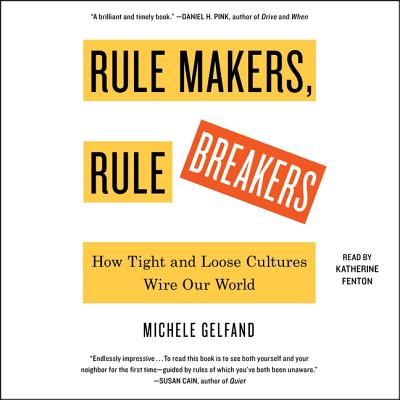 By Michele Gelfand, Katherine Fenton (Read by)
$39.99
Special Order - may be out of print

Celebrated cultural psychologist Michele Gelfand offers a radical new theory about cultural differences that explains why some countries, cultures, and individuals rigorously abide by a host of norms, and others do precisely the opposite, with surprising results.

Why are clocks in Germany always correct, while those in Brazil are frequently wrong? Why are Singaporeans jailed for selling gum? Why do women in New Zealand have three times the sex of females worldwide? Why was the Daimler-Chrysler merger ill-fated from the start? And why does each generation of Americans give their kids weirder and weirder names?

Curious about the answers to these and other questions, award-winning psychologist Michele Gelfand has spent two decades studying both tight societies (with clearly stated rules and codes of ethics) and loose societies (more informal communities with weak or ambiguous norms). Putting each under the microscope, she conducted research in more than fifty countries and collaborated with political scientists, neuroscientists, computer scientists, anthropologists, and archeologists. Her fascinating conclusion: behavior seems largely dependent on perceived threats. It's why certain nations seem predisposed to tangle with others; some American states identify as Red and others as Blue; and those attending a sports contest, health club, or school function behave in prescribed ways.

Rule Makers, Rule Breakers reveals how to predict national variations around the globe, why some leaders innovate and others don't, and even how a tight vs. loose system can determine happiness. Consistently riveting and always illuminating, Michele Gelfand's book helps us understand how a single cultural trait dramatically affects even the smallest aspects of our lives.

This feature require that you enable JavaScript in your browser.
END_OF_DOCUMENT_TOKEN_TO_BE_REPLACED

This feature require that you enable JavaScript in your browser.
END_OF_DOCUMENT_TOKEN_TO_BE_REPLACED

This feature require that you enable JavaScript in your browser.
END_OF_DOCUMENT_TOKEN_TO_BE_REPLACED