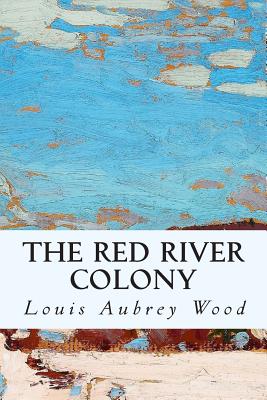 The Red River Colony is a Canadian history classic by Louis Aubrey Wood. The right to the fur trade in America had been granted--given away, as the English of the time thought--by the hand of Charles II of England. In prodigal fashion Charles conceded, in 1670, a charter, which conveyed extensive lands, with the privileges of monopoly, to the 'Company of Adventurers of England trading into Hudson's Bay.' But if the courtiers of the Merry Monarch had any notion that he could thus exclude all others from the field, their dream was an empty one. The Red River Colony (or Selkirk Settlement) was a colonization project set up in 1811 by Thomas Douglas, 5th Earl of Selkirk on 300,000 square kilometres (120,000 sq mi) of land. This land was granted to him by the Hudson's Bay Company, which is referred to as the Selkirk Concession. The establishment of Canada in the late 19th century led to the creation of what is today Manitoba, although much of its original territory is now part of the United States. The Selkirk Concession, also known as Selkirk's Grant, included the portions of Rupert's Land, or the watershed of Hudson Bay, bounded on the north by the line of 52 N latitude roughly from the Assiniboine River east to Lake Winnipegosis. It then formed a line of 52 degrees N latitude from Lake Winnipegosis to Lake Winnipeg, and by the Winnipeg River, Lake of the Woods and Rainy River. On the west of the Selkirk Concession, it is roughly formed by the current boundary between Saskatchewan and Manitoba. These covered portions consist of present-day southern Manitoba, northern Minnesota, and eastern North Dakota, in addition to small parts of eastern Saskatchewan, northwestern Ontario, and northeastern South Dakota. Growing up in Scotland in the wake of the Jacobite rising of 1745, Lord Selkirk was constantly troubled by the plight of his Scottish kin. Selkirk was influenced by humanitarian luminaries such as William Wilberforce and, following the forced displacement of Scottish farmers that took place during the Highland Clearances, decided that emigration was the only viable option to improve the livelihood of the Scottish people. Upon inheriting his father's title in 1799, Selkirk focused the majority of his time and resources on establishing a Scottish colony in North America. Selkirk became interested in the Red River region after reading Alexander MacKenzie's Voyages in 1801; however, Selkirk was prevented from settling the region in 1802 when the Hudson's Bay Company raised concerns that the proposed colony would interfere with the running of the company. During the first decade of the nineteenth century Selkirk established two unsuccessful agricultural colonies in British North America but continued to pursue the settlement of the Red River region. 3] By 1807 Selkirk acknowledged that an alliance with either the Hudson's Bay or North West Company, the dominant fur trading companies at the time, was essential to the establishment of a colony at Red River. By 1811 the Hudson's Bay Company had reconsidered Selkirk's proposal and granted Selkirk 300,000 km2 (116,000 sq mi), an area five times the size of Scotland, to establish an agricultural settlement in the region of Red River. Supplies of "produce, such as flour, beef, pork and butter..." would be affordable to manufacture in this colony, and would reduce the costly shipments from Britain. 4] The grant was also pending the annual provision of 200 men to the company and Selkirk's assurance that the colony would remain out of the fur trade. 3] Selkirk, who once mocked the fur trade for rarely grossing more than 200, 000 and only having 3 ships employed in its service, gladly agreed to the terms.: 5] Selkirk referred to this new territory as the District of Assiniboia. 6] At the time of the concession, Red River was the only Hudson Bay Colony that had been established within the company's 610,000-hectare (1.5-million-acre) territory.

This feature require that you enable JavaScript in your browser.
END_OF_DOCUMENT_TOKEN_TO_BE_REPLACED

This feature require that you enable JavaScript in your browser.
END_OF_DOCUMENT_TOKEN_TO_BE_REPLACED

This feature require that you enable JavaScript in your browser.
END_OF_DOCUMENT_TOKEN_TO_BE_REPLACED