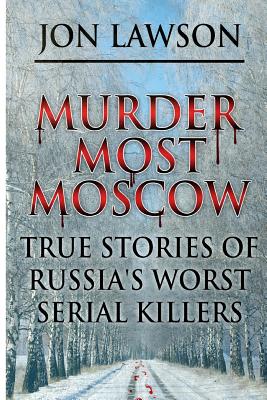 By Jon Lawson
$6.99
usually available in 3-7 days
(This is a special order book which cannot be returned.)

The very words 'serial killer' are enough to strike fear into the heart of any normal person. While many of us are fascinated by this criminal breed and cannot resist the morbid need to learn more about them, we are also repulsed by the various atrocities and horrific acts that they are able to bring themselves to commit. Amongst the best known serial killers, not just in Russia but in the world, is the insanely evil Andrei Chikatilo, aka the Rostov Ripper. However, there were many other serial murderers in Russia that came before him and many that came after him - some were even inspired by him. In this book, you can learn more about some of the most evil serial killers in Russia and the unbelievably horrific acts that they committed, taking the lives of boys and girls, men and women, children and the elderly. Take Vasiliy Kulik for example - a serial killer from a wealthy background whose victim's ages ranged from just two through to seventy-five. Sergei Ryakhovsky was another killer that was not particularly bothered about age or gender, with his victims ranging from children through to old age pensioners. Another thing that is striking about many of these Russian serial killers is that many of them held down very respectable jobs before deciding to turn to murder as a new profession. For example, Mikhail Popkov was a police officer and was even involved in investigating some of the murders that he'd actually committed himself. Maxim Vladimirovich was an emergency doctor, who used his position to gain the trust of vulnerable patients so that he could rob and murder them. Anatoly Slivko ran his own children's club and Andre Chikatilo was a university graduate who had held down a number of teaching job. In this book we look at the cases and crimes of some of the most prolific serial killers in Russia - killers that have carried out crimes ranging from rape and sexual abuse through to murder, cannibalism and necrophilia. These are Russia's worst serial killers.

This feature require that you enable JavaScript in your browser.
END_OF_DOCUMENT_TOKEN_TO_BE_REPLACED

This feature require that you enable JavaScript in your browser.
END_OF_DOCUMENT_TOKEN_TO_BE_REPLACED

This feature require that you enable JavaScript in your browser.
END_OF_DOCUMENT_TOKEN_TO_BE_REPLACED