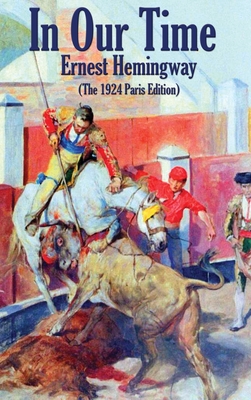 By Ernest Hemingway
Email or call for price.

In Our Time has a curios history in that Earnest Hemingway released it in at least three different versions. The first edition (the 1924 Paris edition) was commissioned by Ezra Pound for Three Mountains Press and contains six prose vignettes. The collection explores loss, grief, separation, and alienation topics Hemingway would never leave behind.

Until Ezra Pound asked him to write this collection Hemingway was primarily a writer of non-fiction. This collection would forever change that. Hemingway's spars style attracted attention immediately. The face of American Fiction would never be the same.

This feature require that you enable JavaScript in your browser.
END_OF_DOCUMENT_TOKEN_TO_BE_REPLACED

This feature require that you enable JavaScript in your browser.
END_OF_DOCUMENT_TOKEN_TO_BE_REPLACED

This feature require that you enable JavaScript in your browser.
END_OF_DOCUMENT_TOKEN_TO_BE_REPLACED