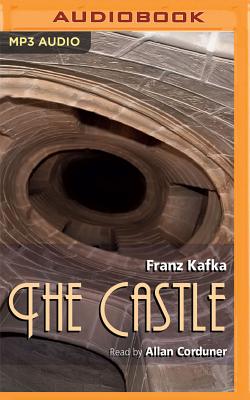 By Franz Kafka, David Whiting (Translator), Allan Corduner (Read by)
$12.99
Special Order - may be out of print

A land-surveyor, known only as K., arrives at a small village permanently covered in snow and dominated by a castle to which access seems permanently denied. K.'s attempts to discover why he has been called constantly run up against the peasant villagers, who are in thrall to the absurd bureaucracy that keeps the castle shut, and the rigid hierarchy of power among the self-serving bureaucrats themselves. But in this strange wilderness, there is passion, tenderness and considerable humour. Darkly bizarre, this complex book was the last novel by one of the 20th century's greatest and most influential writers.

This feature require that you enable JavaScript in your browser.
END_OF_DOCUMENT_TOKEN_TO_BE_REPLACED

This feature require that you enable JavaScript in your browser.
END_OF_DOCUMENT_TOKEN_TO_BE_REPLACED

This feature require that you enable JavaScript in your browser.
END_OF_DOCUMENT_TOKEN_TO_BE_REPLACED