The Heart Broke in (MP3 CD) 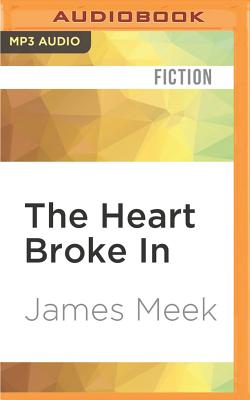 From James Meek, the prize-winning author of the international best seller The People's Act of Love, comes a rich and intricate novel about everything that matters to us now: children, celebrity, secrets and shame, the quest for youth, loyalty and betrayal, falls from grace, acts of terror, and the wonderful, terrible inescapability of family.

Ritchie Shepherd, an aging pop star and a producer of a reality show for teen talent, is starting to trip over his own lies. Maybe filming a documentary about his father, a British soldier executed by Northern Irish guerrillas, will redeem him.

His sister, Bec, is getting closer and closer to a vaccine for malaria. When she's not in Tanzania harvesting field samples, she's peering through a microscope at her own blood to chart the risky treatment she's testing on herself. She's as addicted to honesty as Ritchie is to trickery.

Val Oatman is the editor of a powerful tabloid newspaper. The self-appointed conscience of the nation, scourge of hypocrites and cheats, he believes he will marry beautiful Bec.

Alex Comrie, a gene therapist (and formerly the drummer in Ritchie's band), is battling his mortally ill uncle, a brilliant and domineering scientist, over whether Alex might actually have discovered a cure for aging. Alex, too, believes he will marry Bec.

Colum Donobhan has just been released from prison, having served a 25-year sentence for putting a gun to Captain Shepherd's head when he refused to give up an informer. He now writes poetry.

Their stories meet and tangle in this bighearted epic that is also shrewd, starkly funny, and utterly of the moment. The Heart Broke In is fiction with the reverberating resonance of truth.

This feature require that you enable JavaScript in your browser.
END_OF_DOCUMENT_TOKEN_TO_BE_REPLACED

This feature require that you enable JavaScript in your browser.
END_OF_DOCUMENT_TOKEN_TO_BE_REPLACED

This feature require that you enable JavaScript in your browser.
END_OF_DOCUMENT_TOKEN_TO_BE_REPLACED