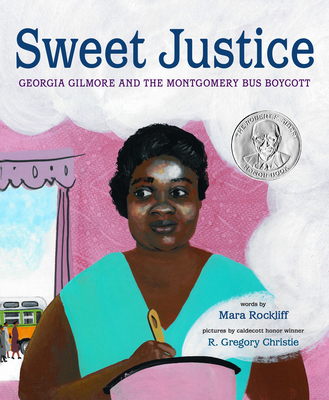 An inspiring picture-book biography about the woman whose cooking helped feed and fund the Montgomery bus boycott of 1956, from an award-winning illustrator.

Georgia Gilmore was cooking when she heard the news Mrs. Rosa Parks had been arrested--pulled off a city bus and thrown in jail all because she wouldn't let a white man take her seat. To protest, the radio urged everyone to stay off city buses for one day: December 5, 1955. Throughout the boycott--at Holt Street Baptist Church meetings led by a young minister named Martin Luther King, Jr.--and throughout the struggle for justice, Georgia served up her mouth-watering fried chicken, her spicy collard greens, and her sweet potato pie, eventually selling them to raise money to help the cause.

Here is the vibrant true story of a hidden figure of the civil rights movement, told in flavorful language by a picture-book master, and stunningly illustrated by a Caldecott Honor recipient and seven-time Coretta Scott King award-winning artist.

MARA ROCKLIFF is the author of many lively historical books for children, including Mesmerized: How Ben Franklin Solved a Mystery That Baffled All of France, winner of the Cook Prize and an Orbis Pictus Honor Book. Her newest titles are Lights! Camera! Alice! The Thrilling True Adventures of the First Woman Filmmaker, called "Subtly STEM, fun, and beautiful to look at" in a starred review from School Library Journal, and Born to Swing: Lil Hardin Armstrong's Life in Jazz, among other books. Visit her on the web at mararockliff.com or on Twitter @mararockliff.

★ "Offering an outstanding take on the Montgomery Bus Boycott from a fresh perspective, this is an essential purchase." —School Library Journal, starred review

★ "Christie’s richly colorful, expressive gouache paintings bring the bus boycott into focus while depicting Gilmore as the text portrays her: a down-to-earth hero who used her considerable talent, energy, and courage to work for justice." —Booklist, starred review

This feature require that you enable JavaScript in your browser.
END_OF_DOCUMENT_TOKEN_TO_BE_REPLACED

This feature require that you enable JavaScript in your browser.
END_OF_DOCUMENT_TOKEN_TO_BE_REPLACED

This feature require that you enable JavaScript in your browser.
END_OF_DOCUMENT_TOKEN_TO_BE_REPLACED