Archibald Finch and the Curse of the Phoenix (Hardcover) 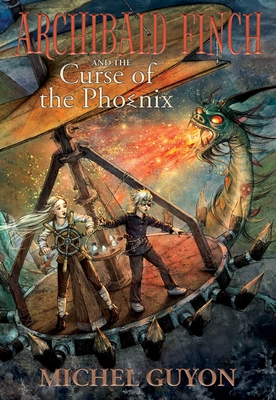 This is book number 2 in the Archibald Finch series.

The Archibald Finch saga continues with another thrilling adventure! It’s been months since our hero returned from Lemurea, but nothing is back to normal. When Archibald realizes he isn’t the only thing that crash-landed at the manor that night, he knows he’ll need to return to the dark world he only just left.

Archibald is a changed boy. He stands up to bullies and hangs out with the gargoyles that used to scare him. But for all his new toughness, he's also a lost boy who misses his friends in Lemurea. When strange footprints are discovered on the manor grounds, he realizes a piece of that world has followed him home...

Without golems, witches or magic, Archibald knows there's little to stop what's prowling the London suburbs, which means he'll have to return to Lemurea to seek Faerydae's help.
In a new adventure for Archibald, Hailee, Oliver, and Faerydae, two worlds collide—two worlds with more in common than any of the kids could’ve imagined. A hunt for clues, golems, and Marodors unearths some shocking answers and hard truths as Archibald and his companions embark on yet another daring journey that tests each of them in different ways.

Michel Guyon was born in France, in a small medieval town perched on a rock, surrounded by high walls, with the remains of an ancient fortress at its heart. That's where the author had his first brush with ancient myths, puzzling legends, and dark tales of the Middle Ages. Since then, Michel has learned a thing or two about mining for clues and connecting the dots, mainly as an investigative journalist for newspapers and magazines. While his childhood fed his fertile imagination, his travels as a reporter, from Bosnia to Afghanistan, were crucial in shaping his view of the world.

This feature require that you enable JavaScript in your browser.
END_OF_DOCUMENT_TOKEN_TO_BE_REPLACED

This feature require that you enable JavaScript in your browser.
END_OF_DOCUMENT_TOKEN_TO_BE_REPLACED

This feature require that you enable JavaScript in your browser.
END_OF_DOCUMENT_TOKEN_TO_BE_REPLACED