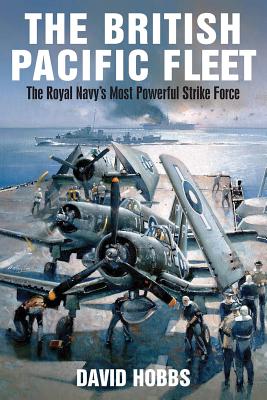 By David Hobbs
$28.95
Backordered - OK to 'add to cart' and we'll let you know when your copy is here

In August 1944 the British Pacific Fleet did not exist. Six months later it was strong enough to launch air attacks on Japanese territory, and by the end of the war it constituted the most powerful force in the history of the Royal Navy, fighting as professional equals alongside the U.S. Navy. How this was achieved by a nation nearing exhaustion after five years of conflict is a story of epic proportions in which ingenuity, diplomacy, and dogged persistence all played a part. This ground-breaking new work by David Hobbs describes the background, creation, and expansion of the British Pacific Fleet from its first tentative strikes, through operations off the coast of Japan, to its impact on the immediate post-war period. It includes the opinions of U.S. Navy liaison officers attached to the British flagships.

This feature require that you enable JavaScript in your browser.
END_OF_DOCUMENT_TOKEN_TO_BE_REPLACED

This feature require that you enable JavaScript in your browser.
END_OF_DOCUMENT_TOKEN_TO_BE_REPLACED

This feature require that you enable JavaScript in your browser.
END_OF_DOCUMENT_TOKEN_TO_BE_REPLACED