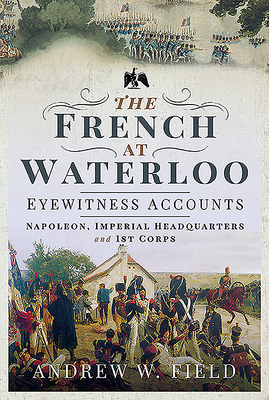 Andrew Field, who has published four best-selling books on the Battle of Waterloo, has established himself as one of the leading experts on the French perspective of the campaign. Using selected extracts from French eyewitness accounts that haven't been published before in English, he has added a new dimension to our understanding of what happened on the battlefield on 18 June 1815. Now he takes his pioneering work a step further by publishing these accounts, with all their vivid and personal detail, in full.

For the first time readers will be in a position to make their own interpretations of them and compare them to the recollections of soldiers from the allied armies, in particular the British, which have largely determined our assumptions about the battle for the last 200 years. They will also gain a heightened insight into the trauma that the French eyewitnesses went through as they tried to explain how the French lost a battle they claim they had been on the point of winning.

This, the first of two volumes of the French accounts, features Napoleon's own description of the battle, those of his immediate household and the Imperial headquarters, and those of members of 1st Corps. Napoleon's own version of events, one of the first to be published in France, was used as the basis of many subsequent histories that ignore or gloss over his many dubious claims. His account of his actions and his view of what happened on that decisive day, and those of his close associates, make fascinating reading.

This feature require that you enable JavaScript in your browser.
END_OF_DOCUMENT_TOKEN_TO_BE_REPLACED

This feature require that you enable JavaScript in your browser.
END_OF_DOCUMENT_TOKEN_TO_BE_REPLACED

This feature require that you enable JavaScript in your browser.
END_OF_DOCUMENT_TOKEN_TO_BE_REPLACED