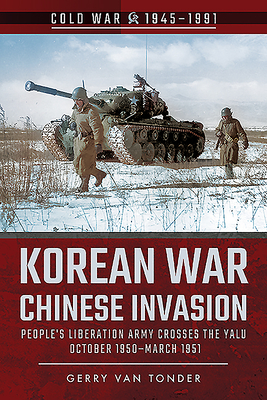 In his first four volumes on the Korean War, the author traces the war's progress from the North Korean invasion of June 1950, the desperate American defense of the Pusan Perimeter, General Douglas MacArthur's daring and highly successful amphibious offensive at Inch'ŏn, and his subsequent advance across the 38th Parallel to the Yalu River on the Chinese Manchurian border

Communist Chinese forces, that have been secretly infiltrating North Korean territory by slipping across the Yalu from mid-October 1950, ambush a South Korean regiment in the mountains of central North Korea. This is the first of several Chinese victories over unsuspecting and overstretched South Korean and American units in the winter of 1950/1.

On 27 November 1950, Chinese leader Mao Zedong, ostensibly fearful of the consequences of hostile American forces on his country's border along the Yalu River, orders 250,000 troops into Korea, with express orders to annihilate the UN forces. In the western half of the theater, US General Walton H. Walker's Eighth Army front along the Ch'ŏngch'ŏn axis is breached, while to the east, the US X Corps suffers a series of crushing defeats, including at the Chosin Reservoir, precipitating a massive evacuation from the North Korean port of Hungnam.

This feature require that you enable JavaScript in your browser.
END_OF_DOCUMENT_TOKEN_TO_BE_REPLACED

This feature require that you enable JavaScript in your browser.
END_OF_DOCUMENT_TOKEN_TO_BE_REPLACED

This feature require that you enable JavaScript in your browser.
END_OF_DOCUMENT_TOKEN_TO_BE_REPLACED