This Much Is True (Hardcover) 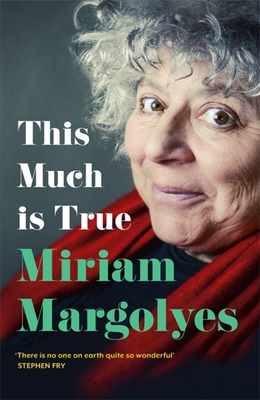 'There is no one on earth quite so wonderful' STEPHEN FRY

BAFTA-winning actor, voice of everything from Monkey to the Cadbury's Caramel Rabbit, creator of a myriad of unforgettable characters from Lady Whiteadder to Professor Sprout, MIRIAM MARGOLYES, OBE, is the nation's favourite (and naughtiest) treasure. Now, at the age of 80, she has finally decided to tell her extraordinary life story - and it's well worth the wait.

Find out how being conceived in an air-raid gave her curly hair; what pranks led to her being known as the naughtiest girl Oxford High School ever had; how she ended up posing nude for Augustus John as a teenager; why Bob Monkhouse was the best (male) kiss she's ever had; and what happened next after Warren Beatty asked 'Do you fuck?'

From declaring her love to Vanessa Redgrave to being told to be quiet by the Queen, this book is packed with brilliant, hilarious stories. With a cast list stretching from Scorsese to Streisand, a cross-dressing Leonardo di Caprio to Isaiah Berlin, This Much Is True is as warm and honest, as full of life and surprises, as its inimitable author.

Born in Oxford, England in 1941 & educated at Newnham College, Cambridge, MIRIAM MARGOLYES is an award-winning veteran of the stage and screen, and an internationally acclaimed voice-artist. Winner of the BAFTA Best Supporting Actress award for The Age of Innocence, she received an OBE in 2002 for Services to Drama.

Gleefully outspoken and bursting with hilarious anecdotes, gloriously larger than life . . . I pity every person that is not me right now, drinking in the glory of Margolyes at 80—Eva Wiseman, Observer

Startling, thrillingly outspoken, provocative, potty-mouthed and exhilarating . . . THIS MUCH IS TRUE is never boring. Her personality is so likeable she can only leave you wanting more—Lynn Barber, Daily Telegraph

Wickedly honest . . . When I was reading this book on a train, a stranger asked if I was OK because I was crying with laughter—Hadley Freeman, Guardian

An irreverent, straight-talking, riotous romp through an extraordinary life—Sunday Post

If there is a silver lining to last year's lockdown, it's the fact that Miriam Margolyes finally had time to write her life story . . . invigoratingly outspoken . . . gloriously shocking . . . and captures her force-of-nature personality. Buckle up, you're in for a wild ride—Charlotte Heathcote, Daily Mirror

Now 80 - and no less outrageous and outspoken, the actress presents vignettes from her life that will induce guffaws as much as gasps—The i

Ebullient and bosomy—Roger Lewis, The Times

Stories galore . . . Miriam Margolyes has a life worth immortalising in print . . . An unapologetic account of a life well lived. As irrepressible as ever, Margolyes's warmth and wit shines through—Radio Times

There's so much in the book; each chapter offering a tidbit of information both interesting and hilarious... It's full of life and vigour, as if you're conversing with a friend you've known for a long time—Irish Examiner

Brilliant stories abound in this memoir... which is honest, poignant and wildly indiscreet.—The Guardian

As compelling, forthright and irrepressible as its author—Choice Magazine

Miriam Margolyes' autobiography is crass, brash, rude, crude, funny and sad, and as delightful and surprising as Miriam herself—Good Housekeeping

Potty-mouthed and thrillingly candid, Margolyes's account of her career from teenage nude
modelling for Augustus John to sexy voiceover work for Ann Summers to playing Harry Potter's Professor Sprout is a riotous joy

There's never been a memoir so packed with eye-popping, hilarious and shockingly candid stories.—DAILY MAIL

Beautifully written...interesting and hilarious... full of life and vigour... [reads] as if you're conversing with a friend

This feature require that you enable JavaScript in your browser.
END_OF_DOCUMENT_TOKEN_TO_BE_REPLACED

This feature require that you enable JavaScript in your browser.
END_OF_DOCUMENT_TOKEN_TO_BE_REPLACED

This feature require that you enable JavaScript in your browser.
END_OF_DOCUMENT_TOKEN_TO_BE_REPLACED