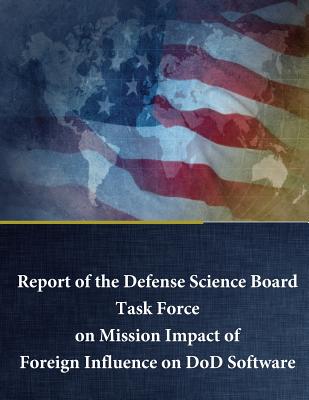 By Penny Hill Press (Editor), Office of the Under Secretary of Defense
$12.95

Software has become the central ingredient of the information age, increasing productivity, facilitating the storage and transfer of information, and enabling functionality in almost every realm of human endeavor. However, as it improves the Department of Defense's (DoD) capability, it increases DoDs dependency. Each year the Department of Defense depends more on software for its administration and for the planning and execution of its missions. This growing dependency is a source of weakness exacerbated by the mounting size, complexity and interconnectedness of its software programs. It is only a matter of time before an adversary exploits this weakness at a critical moment in history.The software industry has become increasingly and irrevocably global. Much of the code is now written outside the United States (U.S.), some in countries that may have interests inimical to those of the United States. The combination of DoDs profound and growing dependence upon software and the expanding opportunity for adversaries to introduce malicious code into this software has led to a growing risk to the Nation's defense.A previous report of the Defense Science Board, "High Performance Microchip Supply", discussed a parallel evolution of the microchip industry and its potential impact on U.S. defense capabilities. The parallel is not exact because the microchip fabrication business requires increasingly large capital formation - a considerable barrier to entry by a lesser nation-state. Software development and production, by contrast, has a low investment threshold. It requires only talented people, who increasingly are found outside the United States.The task force on microchip supply identified two areas of risk in the off-shoring of fabrication facilities - that the U.S. could be denied access to the supply of chips and that there could be malicious modifications in these chips. Because software is so easily reproduced, the former risk is small. The latter risk of "malware," however, is serious. It is this risk that is discussed at length in this report.

This feature require that you enable JavaScript in your browser.
END_OF_DOCUMENT_TOKEN_TO_BE_REPLACED

This feature require that you enable JavaScript in your browser.
END_OF_DOCUMENT_TOKEN_TO_BE_REPLACED

This feature require that you enable JavaScript in your browser.
END_OF_DOCUMENT_TOKEN_TO_BE_REPLACED