From Boxing Ring to Battlefield: The Life of War Hero Lew Jenkins (Hardcover) 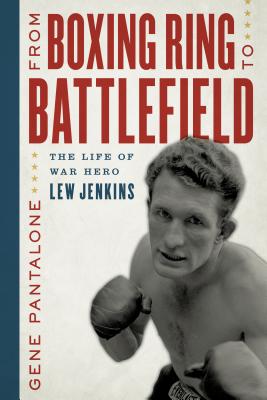 By Gene Pantalone, John Disanto (Foreword by)
$36.00
Special Order - may be out of print

World champion boxer Lew Jenkins fought his whole life. As a child, he fought extreme poverty during the Great Depression; in his twenties, he fought as a professional boxer and became a world champion; and at the pinnacle of his boxing career, Jenkins fought in World War II and the Korean War. From Boxing Ring to Battlefield: The Life of War Hero Lew Jenkins details for the first time this extraordinary story. Despite his talent for boxing, Jenkins often fought and trained in drunken stupors. And though he became the world lightweight champion, he soon wasted his ring title and all his money. Unable to find meaning in life at the peak of his boxing success, Jenkins discovered values to which he could cling during World War II and the Korean War. His efforts earned him one of the highest decorations for bravery, the Silver Star. From Boxing Ring to Battlefield features exclusive interviews with Lew Jenkins's son and grandson, providing a personal perspective on the life of this complicated war hero. The first biography of Jenkins, this book will fascinate boxing fans and historians alike.

Gene Pantalone is an expert on the golden age of boxing--1920 to 1950--and Madame Bey's boxing camp, which hosted fourteen heavyweight champions and no fewer than eighty International Boxing Hall of Fame inductees. He is a contributing writer to the boxing website The Weigh-In and author of Madame Bey's: Home to Boxing Legends.

This feature require that you enable JavaScript in your browser.
END_OF_DOCUMENT_TOKEN_TO_BE_REPLACED

This feature require that you enable JavaScript in your browser.
END_OF_DOCUMENT_TOKEN_TO_BE_REPLACED

This feature require that you enable JavaScript in your browser.
END_OF_DOCUMENT_TOKEN_TO_BE_REPLACED