Chasing the Bear: How Bear Bryant and Nick Saban Made Alabama the Greatest College Football Program of All Time (Hardcover) 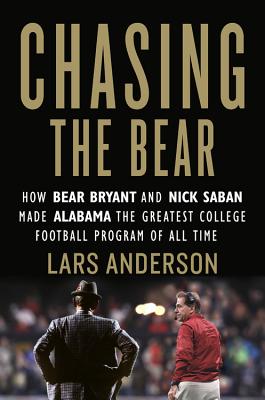 A dual biography of two coaching legends -- Bear Bryant and Nick Saban -- who built the Alabama Crimson Tide into a true football dynasty.
Both Bear Bryant and Nick Saban are undeniable kings of college football, two coaches at Alabama who have each won more national championships -- six apiece -- than anyone else in the history of the game. CHASING THE BEAR examines how they did it, revealing along the way their similarities in style, background, football philosophy, and recruiting methods, while providing readers a rare inside look at two of the greatest leaders in the history of sports.

Bear Bryant and Nick Saban never met, but they have more in common than either of them realize. Both grew up in small towns -- Bryant in Moro Bottom, Arkansas, a dot on the map, and Saban from Monongah, West Virginia, population five hundred. As a child, Saban pumped gas at his father's service station, washing and waxing cars and doing anything he could to help the business. Bryant's father suffered from multiple physical ailments, which forced Bryant to work to keep the family farm going. Both men knew the value of hard work from the time they were young boys, and both understood that there were no shortcuts to success. But both dreamed of escaping their hometowns, and both used football as the means to do so.

Separated by two generations, Bear Bryant and Nick Saban are mythic figures linked by a school, a town, and a barroom debate centering on one question: Which is the greatest college coach of all time?

Lars Anderson is the New York Times bestselling author of six books, including The Stormand the Tide, Carlisle vs. Army, and The All Americans. A twenty-year veteran of Sports Illustrated, Anderson is a senior writer at Bleacher Report and an instructor of journalism at the University of Alabama.

"This isn't just a great football book; this is a beautiful piece of literature that reveals the secrets of the two greatest college football coaches of all-time. The parallels are stunning. Lars Anderson has given us another narrative masterpiece here."—Rick Bragg, Pulitzer Prize-winning journalist and New York Times bestselling author of My Southern Journey

"I covered Bear Bryant and I know Nick Saban. I'm telling you: Lars Anderson, in his usual lyrical style, has achieved something remarkable in these pages: He's shed new light on these coaching giants. A must read for anyone who wants to know about leadership, the molding of character, and what it takes to succeed in life. A brilliant book that transcends sports."—Paul Finebaum, ESPN Radio host and New York Times bestselling author of My Conference Can Beat Your Conference

"Bear Bryant shaped me as a coach and Nick Saban has been a friend for years. No writer in the country could have written this book with the perspective and grace of Lars. Every football coach in America -- and every parent -- will learn about what it takes to win in these pages."—Bruce Arians, two-time AP NFL coach of the year and current head coach of the Tampa Bay Buccaneers

"A must-read for devotees of college football, Crimson Tide fans or not."—Publishers Weekly

"For college fans looking for insight beyond the field, this investigation of a great program's success will make a fine start to 2019's college-football literature."—Booklist

"Anyone wishing to better understand leadership, the molding of character, and what it takes to succeed in life should read these exceptional books."—Bookreporter

"A captivating comparison of two legendary figures in college football that will draw interest from all football fans."—Library Journal

This feature require that you enable JavaScript in your browser.
END_OF_DOCUMENT_TOKEN_TO_BE_REPLACED

This feature require that you enable JavaScript in your browser.
END_OF_DOCUMENT_TOKEN_TO_BE_REPLACED

This feature require that you enable JavaScript in your browser.
END_OF_DOCUMENT_TOKEN_TO_BE_REPLACED