The Blood and Guts: How Tight Ends Save Football (Hardcover) 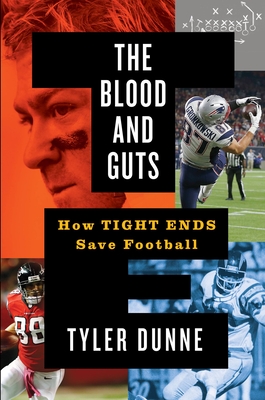 The definitive guide to the real men of the gridiron: NFL tight ends.

There is no profession in sports like the NFL tight end. None. You must mash 320-pound defensive ends in the run game. You must twist your torso at impossible angles to make acrobatic catches downfield in the pass game. You must have a certain element of crazy to you, too. The tight end is a blend of brain and brawn and bruises…so many bruises. BLOOD AND GUTS tracks the fascinating rise of this position one tight end at a time, from Mike Ditka and John Mackey in the '60s to Rob Gronkowski today. As much as football has changed over the years, there has always been one glorious constant: the tight end.

None of this is by accident, either. There’s a reason all of these players were magnetically drawn to the position.

In BLOOD AND GUTS, Tyler Dunne interviews the greatest tight ends ever, whose stories reveal why they were uniquely qualified to serve as the blood and the guts of football—the players keeping this sport alive and well. There’s a reason Mike Ditka epitomized true toughness in pro football through the 1960s. Ben Coates, the son of a World War II vet, put an entire childhood spent building roofs to use by smashing defenders in the open field. Tony Gonzalez matured from a kid terrified of bullies to an absolute beast terrifying defensive backs. His entire life, Jeremy Shockey has been hellbent on sticking it to anyone who doubts him. And from afar, a young “Gronk” idolized Shockey and took his approach to a whole new level.

Here, great American tight ends share countless harrowing, never-before-told stories. One moment, a tight end (Gonzalez) nearly socks a coach in the eye. The next, a tight end (Shockey) is breaking the orbital bone of someone in a bar fight.

There’s no one in sports like them. BLOOD AND GUTS brings them to life.

Tyler Dunne is the founder of Go Long, a newsletter publication dedicated to longform pro football journalism. He has covered the NFL since 2007 for various outlets, including Bleacher Report, the Buffalo News and the Milwaukee Journal Sentinel. His writing has been acknowledged by APSE, PFWA and his story on the Green Bay Packers in 2018 drew the most reads for any story in Bleacher Report history. He graduated from Syracuse's S.I. Newhouse School of Public Communications and lives in Western New York with his wife, Gina, and two children. The Blood and Guts is his first book.

“This is an exceptional look at one of football’s most fascinating and overlooked positions, reported and told richly by one of our finest pro football writers. With insight and humanity, Tyler Dunne profiles the game’s great tight ends while reflecting on their place in the evolution of their position.”—Dan Pompei, senior writer for The Athletic

“Football is complicated, as you know. We need enthusiastic wordsmiths who love the game to figure it out, and to advance theories about the real meaning of it. This is what Tyler Dunne does in THE BLOOD AND GUTS. In these pages—very early, in fact—you’ll learn why the tight end position is so crucial to understanding everything about football, and you’ll see why the ethos of men like Mike Ditka was so important to the game, and to the position. As Dunne writes, ‘The tight end is the sport itself distilled to one position.’ He's right.”—Peter King, NBC Sports

"From the grit and power of Iron Mike Ditka to the athleticism of Tony Gonzalez and the combination of both with Rob Gronkowsk - and so many others in between - Tyler Dunne brings us inside the souls of these men who helped transform the game of football. Ditka and John Mackey began the tight end revolution and Gonzalez, George Kittle, Gronk and others refined it, elevating the position to an art form and showing how teams could gain a huge advantage. Dunne’s revealing portraits of these men provide terrific insight into a fearlessness and relentlessness that make them some of the toughest and most interesting players in the game. He earns their trust, and they respond by sharing details of their lives that enrich the reader in a well-written and painstakingly reported book."—Bob Glauber, co-author of The Forgotten First and author of Guts and Genius

“Just like every great quarterback needs a great tight end, every fan of the game needs this book! Stories that span the history of the game and Tyler does an incredible job bringing it to life.”—Dallas Clark, Former Colts TE

“It’s easy to watch and appreciate a Gronk or George Kittle dominate a game, blocking and receiving. It’s not easy to step back and say, how did we get here at this all-important position? That’s what Ty does. An exhaustive, illuminating, fascinating deep dive is the result. By the time you finish, you’ll know more about the NFL’s best and craziest dudes than you ever could ask for. A great read.”—Ian Rapoport, NFL Network’s Insider

"Tyler ranks among the best storytellers about society’s best sport, but I’m still blown away by just how many hilarious…and depressing… and just plain cool tales about tight-end legends he’s put together here. From Sharpe to Shockey and Ghost to Gronk, from Jackie Smith’s drop to Red Right 88, from their early years to their most iconic plays, from the wild late nights to the cafeteria fights…all are woven together into one big, captivating yarn about football’s plus-sized passcatchers. I hate when people say stuff like this, but I’m gonna say it, anyway: If you love football, there’s zero chance you won’t love this book. The only question left: Which position is Dunne gonna do next?!"

"NFL fans appreciate Dunne's focused examination of this position and the great athletes who have defined it."—Booklist Reviews

This feature require that you enable JavaScript in your browser.
END_OF_DOCUMENT_TOKEN_TO_BE_REPLACED

This feature require that you enable JavaScript in your browser.
END_OF_DOCUMENT_TOKEN_TO_BE_REPLACED

This feature require that you enable JavaScript in your browser.
END_OF_DOCUMENT_TOKEN_TO_BE_REPLACED