The Liar: How a Double Agent in the CIA Became the Cold War's Last Honest Man (Hardcover) 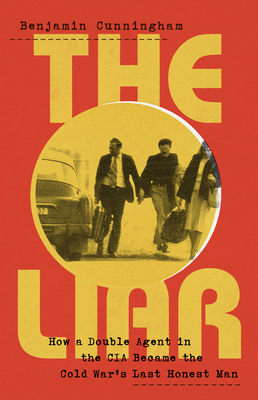 The Cold War meets Mad Men in the form of Karel Koecher, a double agent whose shifting loyalties and over-the-top hedonism reverberated from New York to Moscow

In the mid-1970s, the CIA and KGB watched Karel Koecher closely—they were both convinced he was working for the enemy. And they were both right. Traveling with his wife, Hana, Koecher posed as a Czechoslovak asylum seeker and arrived in the US as a Communist sleeper agent. After parlaying a doctorate from Columbia into a job at the CIA, Koecher proceeded to operate as a double agent at the height of the Cold War.

Shunning a low profile, the Koechers embraced Manhattan’s high life—with cocaine, swinging, and parties emblematic of the times and their penchant for risk. Hana, who was no more than a shy teenager when she arrived, grew into a sophisticated international diamond dealer who relayed messages to Karel’s handlers. Riding a wave of euphoria, the Koechers felt unstoppable. But it was too good to last.

Using newly declassified documents, interrogation tapes, and extraordinary firsthand accounts from the Koechers themselves, Cunningham reconstructs their double lives and the fading Cold War, where a strange moral fog made it hard to know what truth was being fought for, and to what end.

Benjamin Cunningham is a Barcelona-based writer. He is a former correspondent for The Economist, editor in chief of the Prague Post, and copy boy at the Saginaw News. In addition he contributes to The Guardian, The Los Angeles Review of Books, Aspen Review, Le Monde Diplomatique and is an opinion columnist for Sme, Slovakia’s main daily newspaper. He is a PhD candidate at the University of Barcelona.

“The glamour of espionage usually gets more attention than the flawed and fascinating people who practice it. By focusing his story on the rich and multilayered lives of Karel and Hana Koecher, Cunningham gets as close to the heart of the spy as it’s possible to get.”—Joe Weisberg, creator of The Americans

“Engagingly written, carefully researched, and richly informed, The Liar tells a gripping story of a prominent Czechoslovak Secret Police agent against the backdrop of Cold War history. Cunningham depicts a character worthy of a novel without compromising on historical accuracy. Struggling to be an agent of his own life while at the mercy of world superpowers, Cunningham’s Karel Koecher meets Kafka’s K. in John LeCarré’s universe.”—Veronika Tuckerová, department of Slavic languages & literatures, Harvard University

“Cunningham delivers a carefully researched, logically analyzed portrait of the man and his times… he is an excellent student of a most difficult topic.”—Decatur Daily

This feature require that you enable JavaScript in your browser.
END_OF_DOCUMENT_TOKEN_TO_BE_REPLACED

This feature require that you enable JavaScript in your browser.
END_OF_DOCUMENT_TOKEN_TO_BE_REPLACED

This feature require that you enable JavaScript in your browser.
END_OF_DOCUMENT_TOKEN_TO_BE_REPLACED