The Silver Waterfall: How America Won the War in the Pacific at Midway (Hardcover) 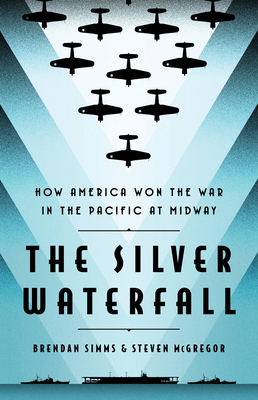 Eighty years after the stunning and decisive battle, a revelatory new history of Midway

The Battle of Midway was, on paper, an improbable victory for the smaller, less experienced American navy and air force, so much so that it was quickly described as “a miracle.” Yet fortune favored the Americans at Midway, and the conventional wisdom has it that the Americans’ lucky streak continued as the war in the Pacific turned against the Japanese. This new history demonstrates that luck, let alone miracles, had little to do with it.

In The Silver Waterfall, Brendan Simms and Steven McGregor show how the efforts of America’s peacetime navy combined with creative innovations made by designers and industrialists were largely responsible for the victory. The Douglas Dauntless Dive Bomber, a uniquely conceived fighting weapon, delivered a brutally accurate attack the Japanese quickly came to dread.

Told through a vivid narrative, Simms and McGregor show how the course of the war in the Pacific was dramatically altered, emphasizing the crucial combination of a culture of innovation, a brilliant contribution from immigrants, and a vital intelligence coup that allowed the navy to orchestrate the devastating attack on the Japanese and dominate the Pacific for good.

Brendan Simms is author of The Longest Afternoon, a dramatic description of the defense of the farm of La Haye Sainte during the battle of Waterloo. In 2019 he published the acclaimed biography Hitler. His most recent book, cowritten with Charlie Laderman, is Hitler’s American Gamble: Pearl Harbor and Germany’s March to Global War.

Steven McGregor  is a US Army veteran with a graduate degree in history from the University of Cambridge.

“Their account of the battle is pulsating stuff told with a pleasing amount of human drama and technical detail; the two do not always make easy bedfellows, but it works effectively here.”—Times (UK)

“[G]ripping…Simms and McGregor, using primary source material from the sailors and airmen on both sides, put you in the cockpit of American fighters and bombers and Japanese Zeros, and on the bridges of American and Japanese warships on the day of the battle.”—New York Journal of Books

“This is…no dry account of materiel but a minute-by-minute account, told from both sides, of the battle as it unfolded. There is plenty of bravery on show but even more horror as sailors on stricken ships laden with fuel and explosives find themselves trapped in floating bombs.”—New Statesman

“Immersive…Simms and McGregor also provide a searing, moment-by-moment account from the Japanese perspective…Well-researched and fluidly written, this military history issues a stark warning for the future.”—Publishers Weekly

“The battle of Midway in June 1942 has rightly held a commanding place in the history of the Second World War. And this great and significant new book by Professor Brendan Simms and veteran Steve McGregor not only reminds us of Midway’s importance and drama, but also clearly establishes that the US victory was not just luck, despite common views to the contrary. Simms and McGregor relate a riveting story of migration, innovation, and skill that takes us from 1920s California to the climactic five minutes that doomed the Japanese strike force to destruction—and from there to the lessons of a climactic battle for a United States that once more faces a rising power in the Pacific. The Silver Waterfall is a story of authentic American characters, settings, issues, and heroism that will stay with readers long after they put the book down.”—General David Petraeus, US Army (ret.); former commander of the surge in Iraq, US Central Command, and US/Coalition Forces in Afghanistan; and former director of the CIA

“While the Battle of Midway was decided by a margin of just five minutes, this was a critical difference made possible by the US Navy’s relentless, painstaking effort. Numerous books have been written on this monumental battle to prove this point, but none shed better light on the battle-winning weapon, the Dauntless, than The Silver Waterfall. With extensive research on the technologies, tactics, and people behind the battle’s aerial warfare, this book stands out among the literature, skillfully elucidating the ultimate causes of US naval victory.”—Tsukamoto Katsuya, head of the security and economy division, National Institute for Defense Studies, Japan

“The Silver Waterfall provides a top-to-bottom description of the epic Battle of Midway.”—Barrett Tillman, author of Enterprise: America’s Fightingest Ship

“The Silver Waterfall is a splendidly written account of America’s greatest naval battle. Simms and McGregor capture the grand sweep of history and strategy while bringing to life the skill, luck, and heroism of the men who turned the tide. An elegant tribute to the past with sobering reflections for our own time.”—A. Wess Mitchell, former assistant secretary of state, European and Eurasian Affairs

“From aeronautical drawing boards in Southern California to Pacific waters aflame with spilled oil from twisted steel hulks, The Silver Waterfall is a unique new telling of one of history’s greatest battles. Written by one of the world’s leading historians and by a US Army combat veteran, The Silver Waterfall reveals in detail how advanced technology, intelligence gathering, planning, and unimaginable heroism turned the tide of the Pacific War in a single, blood-soaked day. As America faces a geopolitical challenge in Asia potentially equal to that of the 1940s, Simms and McGregor remind us why history remains a critical guide to thinking about the future. All policymakers should read the lessons in this book.”—Michael R. Auslin, Hoover Institution, Stanford University, and author of Asia’s New Geopolitics: Essays on Reshaping the Indo-Pacific

“A vividly told and compelling history of one of history’s most remarkable battles. While the Americans famously had much luck on their side, Simms and McGregor make clear that fortune favored the prepared—the Americans brought not only luck but also determination, skill, intrepidity, and professionalism. As the American Pacific primacy Midway helped gain is now under challenge from a rising China, this book serves as a timely and stirring reminder of the qualities it will take to sustain it.”—Elbridge Colby, former deputy assistant secretary of defense, Strategy and Force Development, US Department of Defense; and author of Strategy of Denial: American Defense in an Age of Great Power Conflict

“In The Silver Waterfall, authors Simms and McGregor focus on how the pivotal 1942 Battle of Midway was equally a result of technology and solid training as it was good fortune in catching Admiral Nagumo’s Japanese carrier fleet at such an inopportune moment. In their original presentation, the authors build up to the climax by focusing on dive-bomber engineer Ed Heinemann, military strategist Chester Nimitz, and SBD Dauntless dive-bomber pilot Norman ‘Dusty’ Kleiss, a skilled aviator who epitomized American performance on June 4.
The book is rich with gripping drama during its lengthy coverage of the key five-minute span where Nimitz’s carrier-air groups assault the Japanese carrier fleet. Simms and McGregor offer excellent Japanese perspectives of the chaos and destruction as carriers Kaga, Akagi, and Soryu are blasted apart. This fresh look at the Battle of Midway belongs on the bookshelf of any serious student of the Pacific War.”—Stephen L. Moore, author of Battle Stations: How the USS Yorktown Helped Turn the Tide at Coral Sea and Midway

“If you only read one book of history this year, make it The Silver Waterfall. Nobody better conjures military history into view. We need urgently to understand their conclusion that ‘unless the United States wakes up to the steady erosion of its naval power, it risks another Pearl Harbor—without any guarantee of another Midway.’”—Kori Schake, director of foreign and defense policy, American Enterprise Institute

“It is said that luck happens when opportunity meets preparation.  In the case of the Battle of Midway, one might add courage and determination.  The Silver Waterfall is not only a gripping account of the most pivotal naval battle in the Pacific War, but also a compelling analysis of the causes of America’s victory.”—H.R. McMaster, author of Battlegrounds and Dereliction of Duty

This feature require that you enable JavaScript in your browser.
END_OF_DOCUMENT_TOKEN_TO_BE_REPLACED

This feature require that you enable JavaScript in your browser.
END_OF_DOCUMENT_TOKEN_TO_BE_REPLACED

This feature require that you enable JavaScript in your browser.
END_OF_DOCUMENT_TOKEN_TO_BE_REPLACED