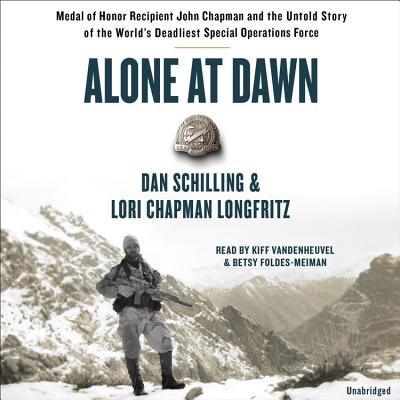 By Dan Schilling, Lori Longfritz, Kiff VandenHeuvel (Read by), Betsy Foldes Meiman (Read by)
$35.00
Special Order - may be out of print

The New York Times bestselling true account of John Chapman, Medal of Honor recipient and Special Ops Combat Controller, and his heroic one-man stand during the Afghan War, as he sacrificed his life to save the lives of twenty-three comrades-in-arms.
In the predawn hours of March 4, 2002, just below the 10,469-foot peak of a mountain in eastern Afghanistan, a fierce battle raged. Outnumbered by Al Qaeda fighters, Air Force Combat Controller John Chapman and a handful of Navy SEALs struggled to take the summit in a desperate bid to find a lost teammate.
Chapman, leading the charge, was gravely wounded in the initial assault. Believing he was dead, his SEAL leader ordered a retreat. Chapman regained consciousness alone, with the enemy closing in on three sides.
John Chapman's subsequent display of incredible valor -- first saving the lives of his SEAL teammates and then, knowing he was mortally wounded, single-handedly engaging two dozen hardened fighters to save the lives of an incoming rescue squad -- posthumously earned him the Medal of Honor. Chapman is the first airman in nearly fifty years to be given the distinction reserved for America's greatest heroes.
Alone at Dawn is also a behind-the-scenes look at the Air Force Combat Controllers: the world's deadliest and most versatile special operations force, whose members must not only exceed the qualifications of Navy SEAL and Army Delta Force teams but also act with sharp decisiveness and deft precision -- even in the face of life-threatening danger.
Drawing from firsthand accounts, classified documents, dramatic video footage, and extensive interviews with leaders and survivors of the operation, Alone at Dawn is the story of an extraordinary man's brave last stand and the brotherhood that forged him.

A thirty-year special operations and Combat Control veteran, DAN SCHILLING has had numerous combat and clandestine deployments around the world, including the operation popularly known as Black Hawk Down, where he is credited with saving the lives of a Ranger and SEAL under fire. He later founded and then served as the first commander of two special operations squadrons. An adrenaline enthusiast, he holds the Guinness World Record for most BASE jumps in twenty-four hours and is a mountain speed wing pilot. Dan is also a motivational speaker and consults internationally on security matters. He and his wife, Julie, a former NSA cyberwarfare expert, live on the slopes of the Wasatch Mountains in Utah. For more information on his projects, visit him at DanSchillingBooks.com. LORI CHAPMAN LONGFRITZ is the second of four children born to Gene and Terry Chapman and shares the "middle child" slot with John. She was a longtime advocate for his Medal of Honor and is proud to share the story of her brother, who lived his life the way he died . . . on his terms and in service of others. She continues to write and enjoys speaking about John and the qualities that led to his final and selfless heroic act. Lori, her husband, and son, John, live in the "Forever West" town of Cheyenne, Wyoming.

This feature require that you enable JavaScript in your browser.
END_OF_DOCUMENT_TOKEN_TO_BE_REPLACED

This feature require that you enable JavaScript in your browser.
END_OF_DOCUMENT_TOKEN_TO_BE_REPLACED

This feature require that you enable JavaScript in your browser.
END_OF_DOCUMENT_TOKEN_TO_BE_REPLACED