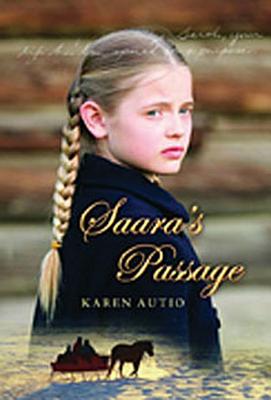 Saara is trying hard to put her horrible experience aboard the doomed Empress of Ireland behind her. She goes to school, roller skates with her best friend and enjoys her new baby cousin. And she is so looking forward to starring in the school play But nightmares-and unanswerable questions-continue to disturb her. War is declared, and the future of the whole world looks uncertain. Then her family is struck with another heavy blow: tuberculosis. Saara's beloved Aunt Marja must go to the sanatorium in Toronto. Who will care for baby Saani? Set in northwestern Ontario at the beginning of the 20th century, her story is Canada's story, as both take up responsibilities handed to them by circumstance and history. Like many Canadians of Finnish descent, Karen Autio grew up in the Thunder Bay, Ontario, area. She now lives in Kelowna, British Columbia, with her husband and two children.

This feature require that you enable JavaScript in your browser.
END_OF_DOCUMENT_TOKEN_TO_BE_REPLACED

This feature require that you enable JavaScript in your browser.
END_OF_DOCUMENT_TOKEN_TO_BE_REPLACED

This feature require that you enable JavaScript in your browser.
END_OF_DOCUMENT_TOKEN_TO_BE_REPLACED