Call to Freedom: The Music of a Great Nation (CD-Audio) 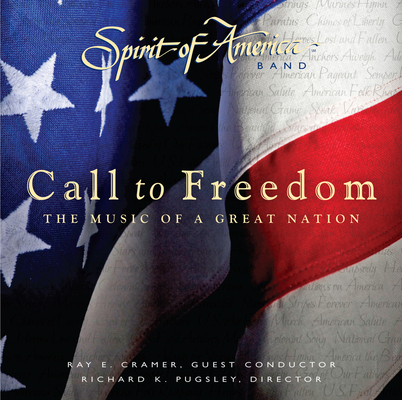 Spirit of America, the award-winning band from Cape Cod, Massachusetts, is proud to present Call to Freedom: The Music of a Great Nation.Featuring works by American composers, from John Philip Sousa to Charles Ives, this CD is a musical tribute to the nation's freedom keepers, and a reminder of the privileges of freedom we enjoy.  This collection of patriotic music reflects the gamut of American history and character — from the victories in times of war expressed in Morton Gould's American Salute, to the light-hearted victories of the baseball diamond captured by John Philip Sousa in The National Game.Listeners will thrill to spirited renditions of the Armed Forces marches, and to visions of splendor in Carmen Dragon's America the Beautiful. On the more serious side, the program also includes God of Our Fathers arranged by Claude T. Smith, and Heroes Lost and Fallen by David Gillingham. Spirit of America closes with the beloved march Stars and Stripes Forever, by John Philip Sousa.
Under the direction of Richard K. Pugsley, Spirit of America is dedicated to the pursuit of the ideals upon which our country was founded. Through the medium of music and marching, Spirit of America upholds the values of teamwork, patriotism, and excellence to inspire the youth of America and audiences of all ages throughout the world. The Wind Ensemble, consisting of the band's finest musicians, has been privileged to work with Ray Cramer of Indiana University, who directed the band for this recording.

"It was a pleasure and honor to be part of this recording. I trust that you, the listener, will appreciate the true 'Spirit' of this outstanding ensemble."
— Ray Cramer

Dedicated to the pursuit of the ideals upon which our country is founded, Spirit of America upholds the values of patriotism, excellence, and teamwork, in celebration of our nation’s freedom, and in gratitude to the men and women who sacrificed their lives. The band has toured both nationally and internationally, with performances in South Korea, Australia, Canada, South Africa, and across the United States, receiving awards both at home and abroad. Spirit of America Marching Band received its name when it was designated as “Best Representing the Spirit of America” at the Washington, D.C. Independence Day Parade in 1986. This patriotic, precision unit has upheld a standard of musical excellence for more than twenty-five years, marching in parades all over the United States, from Provo, Utah to Bristol, Rhode Island.  The Wind Ensemble consists of Spirit of America´s finest musicians. They present the best of band literature, with traditional patriotic and service marches, classical works, medleys, show tunes, orchestral marches, suites, contemporary classical pieces, and original works and arrangements.

"Listening to this, I was made aware of how great this music is...I enjoyed every moment of this recording, and the superb Ray Cramer  is as sterling a choice for maestroship as anyone I can think of. And engineer Steve Colby has done a great job in capturing the sound of this ensemble, bright, yet warm when needed, and nicely attuned to the glories of a full-out wind band. All should be congratulated on a superior job, and I hope there will be more to come in the years that follow."
—Audiophile Audition

This feature require that you enable JavaScript in your browser.
END_OF_DOCUMENT_TOKEN_TO_BE_REPLACED

This feature require that you enable JavaScript in your browser.
END_OF_DOCUMENT_TOKEN_TO_BE_REPLACED

This feature require that you enable JavaScript in your browser.
END_OF_DOCUMENT_TOKEN_TO_BE_REPLACED