The Postcard Killer: The True Story of America's First Profiled Serial Killer and How the Police Brought Him Down (Paperback) 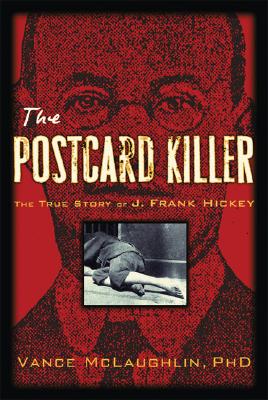 In 1912 John Frank Hickey, "The Postcard Killer," was one of the first known and captured serial killers. This fascinating story tells how a solitary milquetoast of a man wandered the American east coast for decades, harboring a terrifying assortment of personal demons. Many of the behavior patterns that have long since come to be trademarks of the sociopathic killer are revealed in Hickey's long, demented life of crime. Unfortunately, the police and investigators in the early 20th Century had few if any tools to battle with a solitary individual's compulsion to murder young newsboys who wandered the urban streets alone. From his first murder at eighteen until his capture and conviction nearly three decades later, Hickey traveled and worked at anonymous clerical or engineering jobs while he committed murders of breathtaking brazenness, sometimes attacking in open view. Hickey was well into middle age when his need for public attention drove him to taunt his victims' families and mock the police. He began a long series of correspondence about his crimes in the form of postcards. He enjoyed knowing that they could be read by anybody while they were en route. The postcards eventually formed the net that snared him.

Dr. Vance McLaughlin has focused on subject control issues for over thirty years. He has provided litigation support, evaluation of subject control training, and seminars. He has experience in law enforcement as an officer and administrator.

This feature require that you enable JavaScript in your browser.
END_OF_DOCUMENT_TOKEN_TO_BE_REPLACED

This feature require that you enable JavaScript in your browser.
END_OF_DOCUMENT_TOKEN_TO_BE_REPLACED

This feature require that you enable JavaScript in your browser.
END_OF_DOCUMENT_TOKEN_TO_BE_REPLACED