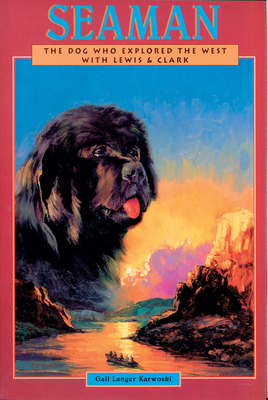 "Once young readers begin this fictional account of the dog's role in the expedition, they will be caught up in the drama and action and even reluctant readers will find it just too good to put down." ―School Library Journal

It is 1804, the year that Meriwether Lewis, William Clark, and the Corps of Discovery set out for their now-legendary exploration of the Louisiana Purchase. With no maps and little idea what wonders and dangers lie ahead, Seaman, a 150-pound Newfoundland dog, proves to be one of the most valuable members of the Corps.

In the face of starvation, Seaman catches and retrieves game, and his intimidating size and teeth protect the small band of explorers - from Native American raiders and even a ferocious grizzly bear As the bond and mutual trust between Seaman and the Corp grows, they're confident that nothing--not even raging waters and towering mountains--will stop them from reaching the West Coast.

Gail Langer Karwoski's thrilling fictional account of Lewis and Clark's expedition with the Corps of Discovery, Seaman, and eventually Sacagawea, is full of accurate details drawn from Lewis's own diary entries and will draw readers into one of the most exciting chapters in American history.

Also by Gail Langer Karwoski:
Quake : Disaster in San Francisco, 1906
Surviving Jamestown: The Adventures of Young Sam Collier
The Tree That Owns Itself

This feature require that you enable JavaScript in your browser.
END_OF_DOCUMENT_TOKEN_TO_BE_REPLACED

This feature require that you enable JavaScript in your browser.
END_OF_DOCUMENT_TOKEN_TO_BE_REPLACED

This feature require that you enable JavaScript in your browser.
END_OF_DOCUMENT_TOKEN_TO_BE_REPLACED