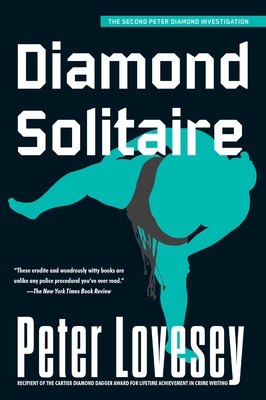 This is book number 2 in the A Detective Peter Diamond Mystery series.

“The chase, which includes a friendly Sumo wrestler and adventures in Japan, is a pleasure to follow, and Lovesey makes the relationship between tough cop and troubled child wholly beguiling.”—Los Angeles Times

Fired from the police force for insubordination, Peter Diamond is reduced to working as a security guard at Harrod’s. Turns out he can’t even hold that job—he gets fired after finding an abandoned Japanese girl in the store after closing. “Naomi,” as he calls her, exhibits strong signs of autism, and he devotes himself to communicating with her in order to glean her identity and return her to her rightful home. Weeks later, a Japanese woman appears out of the blue to claim the little girl, and it appears as though Diamond’s job is done. If only that were true. Armed only with only Naomi’s drawings as clues, Diamond races to track down her kidnappers and save her life.

“The chase, which includes a friendly Sumo wrestler and adventures in Japan, is a pleasure to follow, and Lovesey makes the relationship between tough cop and troubled child wholly beguiling.”
—Los Angeles Times

"A book that, without gimmickry or cross-genre splicing, delivers superb, unashamedly traditional crime writing. Lovesey’s mysteries have won awards in England and France; he has previously been nominated for an Edgar, as he could be again for this fine tale.”
—Publisher’s Weekly, Starred Review

“Polish up the Gold Dagger, Lovesey’s angling for another.”
—Kirkus Reviews, Starred Review

This feature require that you enable JavaScript in your browser.
END_OF_DOCUMENT_TOKEN_TO_BE_REPLACED

This feature require that you enable JavaScript in your browser.
END_OF_DOCUMENT_TOKEN_TO_BE_REPLACED

This feature require that you enable JavaScript in your browser.
END_OF_DOCUMENT_TOKEN_TO_BE_REPLACED