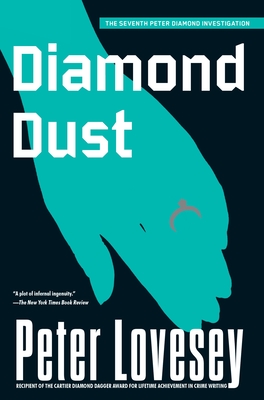 This is book number 7 in the A Detective Peter Diamond Mystery series.

“Lovesey takes his hero to emotional places he’s never been before while constructing a plot of infernal ingenuity.” —The New York Times Book Review

Detective Superintendent Peter Diamond is confronted with a crime that comes too close to home. His beloved wife has been killed, apparently just the most recent victim in a series of murders of police spouses. Despite his superior's orders to leave the solution of this crime to other members of the force, he is determined to find the killer himself.

“Lovesey takes his hero to emotional places he’s never been before while constructing a plot of infernal ingenuity.”
—The New York Times Book Review

“Diamond Dust is a gem. It has tension, emotion and a smorgasbord of red herrings.”
—Associated Press

“Lovesey’s writing is lucid and succinct, and he is a consummate story-teller."
—Colin Dexter, CWA Diamond Dagger-winning author of the Inspector Morse series

“Lovesey plots as well as he creates characters or turns an elegant phrase. Nothing is what it seems . . . He’s so good it’s hard to pin a label on him.”
—Denver Post

“Lovesey will be hard-pressed to surpass this current effort for its combination of the puzzle and the personal, but based on his current achievement, it would be no great surprise if he did.”
—Publishers Weekly, Starred Review

“Diamond Dust is a jewel of many intricate facets.”
—January Magazine

“This latest entry in the Peter Diamond series is among the best and in many ways, the most moving . . . an expertly plotted novel.”
—Reviewing the Evidence

This feature require that you enable JavaScript in your browser.
END_OF_DOCUMENT_TOKEN_TO_BE_REPLACED

This feature require that you enable JavaScript in your browser.
END_OF_DOCUMENT_TOKEN_TO_BE_REPLACED

This feature require that you enable JavaScript in your browser.
END_OF_DOCUMENT_TOKEN_TO_BE_REPLACED