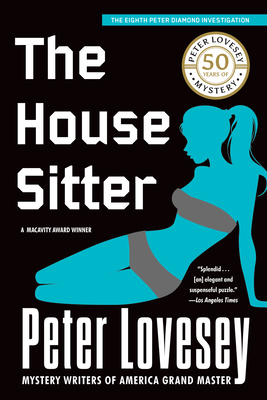 This is book number 8 in the A Detective Peter Diamond Mystery series.

The corpse of a beautiful woman, clad in only a bathing suit, is found strangled to death on a popular Sussex beach. When she is finally identified, it turns out she was a top profiler for the National Crime Faculty, who was working on the case of a serial killer. And though she was a Bath resident, the authorities don't want Detective Superintendent Peter Diamond to investigate the murder. How strange. What could they be trying to hide?

Praise for The House Sitter

“Lovesey demonstrates . . . how richly he deserves the British Crime Writers Association’s Lifetime Achievement award . . . Lovesey is a master of intricate plotting. A Paiute water basket is not more tightly constructed than this extraordinary story nor more exquisite. The identity of the killer, when finally revealed, is genuinely startling.”
—Publishers Weekly, Starred Review

“An ingenious and complex novel, this is Lovesey at the top of his form.”
—Booklist, Starred Review

“This deliciously intricate puzzle makes for very pleasurable reading. The plotting is airtight, and there are any number of arresting and interesting characters.”
—Denver Post

“True wit is the hallmark of the classic British mystery, and Peter Lovesey delivers it, and a lot more, in The House Sitter . . . A literate and delightful mystery."
—Baltimore Sun

This feature require that you enable JavaScript in your browser.
END_OF_DOCUMENT_TOKEN_TO_BE_REPLACED

This feature require that you enable JavaScript in your browser.
END_OF_DOCUMENT_TOKEN_TO_BE_REPLACED

This feature require that you enable JavaScript in your browser.
END_OF_DOCUMENT_TOKEN_TO_BE_REPLACED