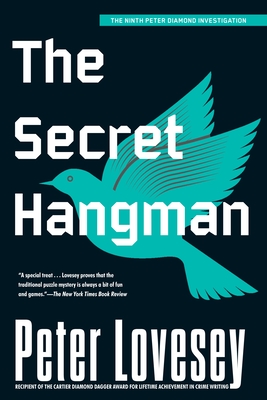 This is book number 9 in the A Detective Peter Diamond Mystery series.

“Lovesey’s delicate balance of humor and suspense [is] one of the delights of contemporary crime fiction.” —Wall Street Journal

Delia Williamson, a waitress and mother of two young girls, is reported missing. She is soon found in a public park, hanging from the crossbar of a children’s swing set. The postmortem reveals that she has been murdered. Her current partner, ex-husband, and a traveling salesman who frequented her restaurant are all suspects. Before Detective Superintendent Peter Diamond can solve the mystery, more will die. But even as he pursues a killer, he finds himself pursued by a secret admirer.

Praise for The Secret Hangman

“When it comes to the classic British puzzle mystery . . . Peter Lovesey is your man. His latest, The Secret Hangman . . . is a special treat . . . Lovesey proves that the traditional puzzle mystery is always a bit of fun and games.”
—The New York Times Book Review

“Lovesey’s delicate balance of humor and suspense [is] one of the delights of contemporary crime fiction.”
—Wall Street Journal

“Lovesey, winner of many honors, including a Gold Dagger Award, should be on every British mystery lover’s short list, and this is a fine place to start.”
—Rocky Mountain News

“Lovesey has cloaked the classic ‘puzzle’ mystery in a fully realized world of coppers and local landmarks . . . Masterful.”
—Houston Chronicle

This feature require that you enable JavaScript in your browser.
END_OF_DOCUMENT_TOKEN_TO_BE_REPLACED

This feature require that you enable JavaScript in your browser.
END_OF_DOCUMENT_TOKEN_TO_BE_REPLACED

This feature require that you enable JavaScript in your browser.
END_OF_DOCUMENT_TOKEN_TO_BE_REPLACED