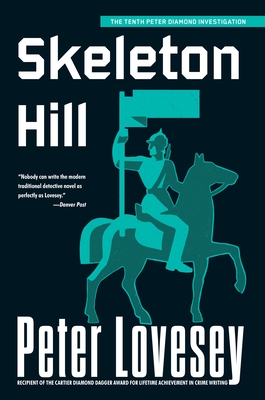 This is book number 10 in the A Detective Peter Diamond Mystery series.

“Peter Lovesey is the real deal. A top master of the police procedural British subgenre, he's an ace at spinning out teasingly slow plot revelations . . . crisp prose and humane characterizations.” —The Seattle Times

On Lansdown Hill, near Bath, a battle between Roundheads and Cavaliers that took place over 350 years ago is annually reenacted. Two of the reenactors discover a skeleton that is female, headless, and only about twenty years old. One of them, a professor who played a Cavalier, is later found murdered. In the course of his investigation, Peter Diamond butts heads with the group of vigilantes who call themselves the Lansdown Society, discovering in the process that his boss Georgina is a member. She resolves to sideline Diamond, but matters don’t pan out in accordance with her plans.

"Diamond is a classic—better catch him while you can."
—Marilyn Stasio, The New York Times Book Review

“Peter Lovesey is the real deal. A top master of the police procedural British subgenre, he's an ace at spinning out teasingly slow plot revelations . . . crisp prose and humane characterizations.”
—The Seattle Times, Best Crime Fiction of the Year

"Nobody can write the modern traditional detective novel as perfectly as Lovesey."
—The Denver Post

"Diamond remains one of the most realistic and human of fictional sleuths . . . another winner in this enduring series."
—Publishers Weekly, Starred Review

This feature require that you enable JavaScript in your browser.
END_OF_DOCUMENT_TOKEN_TO_BE_REPLACED

This feature require that you enable JavaScript in your browser.
END_OF_DOCUMENT_TOKEN_TO_BE_REPLACED

This feature require that you enable JavaScript in your browser.
END_OF_DOCUMENT_TOKEN_TO_BE_REPLACED