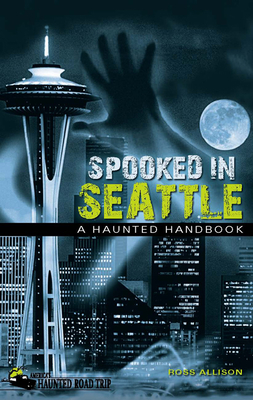 Hop In and Hang On for Seattle's Grandest Ghost Hunt

Seattle may not be as old as some would expect from a haunted city. But it has a large number of haunted sites and stories. Spooked in Seattle, by Ross Allison, leads readers on a journey through Seattle's neighborhoods while teaching the city's history and tales of strange encounters. For those who love to venture off in search of ghosts and the unknown, this book will set readers forth in the right direction. Spooked in Seattle features more than 150 haunted locations, historic and contemporary photos, top ten questions about ghosts, Seattle's top ten most haunted places, location maps and addresses, Seattle history and haunted facts, Seattle cemeteries and tombstone symbols, and more. All of these stories are broken down into sections based on the city's neighborhoods to make finding them easier for ghost enthusiasts. Maps and photos help bring the locations to life, making the Seattle ghosthunting experience easy and enjoyable.

Ross Allison is the president and founder of AGHOST (Advanced Ghost Hunters of Seattle-Tacoma) with twenty years of experience investigating the paranormal and ten years of experience running a ghosthunting group. He travels internationally to investigate paranormal activity, collect ghost stories, and research cemeteries. He lectures to thousands of students at more than one hundred colleges and universities throughout the U.S. on ghosthunting adventures and teaches a class based on his book, Ghostology 101: Becoming a Ghost Hunter, at the University of Washington. He's appeared on a number of radio programs, in magazines, books, news coverage, and television shows, including The Learning Channel's America's Ghost Hunters, The Tonight Show, MTV, CMT, CNN, ABC's Scariest Places on Earth, SyFy's Ghost Hunters, Nightline, and two episodes of Travel Channel's Most Terrifying Places in America. Ross also is the owner of Spooked in Seattle Tours, which last year drew more than 2,500 people and continues to grow every year. The tours are given by bus, by horse-drawn carriage, or on foot. Very popular with tourists, the tours also are attracting locals who want to find out more about the hauntings in the Emerald City. He lives in Tacoma, Washington.

This feature require that you enable JavaScript in your browser.
END_OF_DOCUMENT_TOKEN_TO_BE_REPLACED

This feature require that you enable JavaScript in your browser.
END_OF_DOCUMENT_TOKEN_TO_BE_REPLACED

This feature require that you enable JavaScript in your browser.
END_OF_DOCUMENT_TOKEN_TO_BE_REPLACED