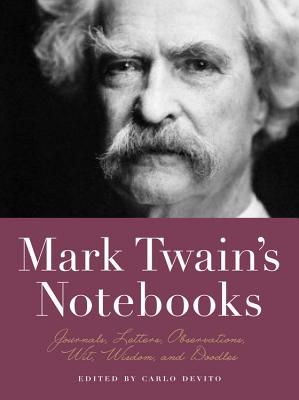 The original and insightful collection that combines Mark Twain's journal writings with his rarely seen sketches and doodles. Fascinating and often hilarious, this is a complete record of the thoughts, ideas, and observations of the father of American literature.

A national treasure and a cultural and literary icon, Mark Twain was called "the father of American literature" by William Faulkner. His beloved works include The Adventures of Huckleberry Finn, Tom Sawyer, and 26 other books. His inimitable prose seamlessly weaves together humor, insight, vivid details, and memorable characters. Along with these published works, Twain, who was also a journalist, produced approximately 40 to 50 pocket notebooks and wrote countless letters, essays, travelogues, and lectures in his lifetime.

Mark Twain's Notebooks is the first collection to gather these writings and combine them with dozens of Twain's rarely seen sketches, doodles, and diagrams, as well as facsimiles of his original journal pages, letters, and essays. The result is page after beautifully designed page of some of the best, yet little-known, writings of Mark Twain. Organized by topics such as science, literature, health, family life, and food, the collection also includes intimate letters that describe the home he built in Hartford, Connecticut; his travels across Europe, the Middle East, and the United States; and his agony over the death of his favorite daughter.

The writing and art is selected by book and publishing veteran Carlo De Vito, who provides fascinating commentary and insights into the material throughout the book.

Carlo De Vito the author of more than fifteen books, including A Mark Twain Christmasand biographies of D. Wayne Lukas, Wellington Mara, Yogi Berra, and Phil Rizzuto. He was the publisher at Running Press Book Publishers and VP, Editorial Director at Sterling Epicure. He lives with his wife and two sons on their farm, the Hudson-Chatham Winery, in Ghent, New York.

This feature require that you enable JavaScript in your browser.
END_OF_DOCUMENT_TOKEN_TO_BE_REPLACED

This feature require that you enable JavaScript in your browser.
END_OF_DOCUMENT_TOKEN_TO_BE_REPLACED

This feature require that you enable JavaScript in your browser.
END_OF_DOCUMENT_TOKEN_TO_BE_REPLACED