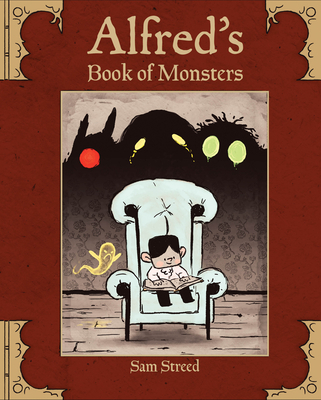 With nods to Tim Burton, Edward Gorey, and Neil Gaiman, this humorous picture book about a Victorian boy obsessed with monsters presents a dark and appealing world, created by debut author/illustrator Sam Streed.

In the graveyard, between stone monuments for forgotten souls, lurks the Black Shuck. . . . Its one blood-red eye burns with an undying rage.

After reading about the slimy Nixie, the angry Black Shuck, and the creepy Lantern Man in his beloved Book of Monsters, Alfred decides to invite the monsters to teatime with his crusty old aunty, who thinks monsters are an improper obsession for a respectable young boy.

Sam Streed is a children's book author/illustrator, game artist, and animator. He recently graduated from Rhode Island School of Design. This is Sam's first picture book.

A young boy who detests "delightful things" shakes up teatime. Alfred prefers to spend his time in his study with a book of monsters, gruesome knickknacks perched on his desk and shelves. While Alfred detests such pleasant occupations as teatime, his aunt (the only other human in the book) is horrified by his ghoulish fancies, claiming that "Polite young boys do not hate tea parties, and they certainly do not want monsters!" But Alfred does, and he issues invitations to tea to each of three monsters in his town. For once, Alfred's teatime is "terrible," just the way he likes it. And his aunt? The disheveled woman kicks back in a chair, her "Whoa" echoing those Alfred utters when he reads his book. This is one pretty spooky picture book, with skulls, a jar of eyeballs, and talk of stolen souls. The Nixie's poison green eyes, the Black Shuck's single red one, and the Lantern Man's bright yellow ones add some brilliant color amid the art's otherwise muted tones, which are dominated by the sepia backdrop. The old-fashioned feel is emphasized by the subdued backgrounds and the setting: floral wallpaper, the candle and inkwell on Alfred's desk, and the duo's rather formal clothing. Streed offers thrills and chills, though Alfred's behavior may seem to straddle or even cross the line of naughtiness. A delightfully spooky book for sturdy young readers.
—Kirkus Reviews


Alfred’s aunt wants him to join her for tea each day so that the pair might have a delightful time. However, Alfred does not want to have a delightful time and instead prefers to have a terrible time poring over the pages of his monster book. One day, Alfred has an genius idea to be able to combine both teatime and monsters and sends out a few invitations. The result is amusing, though certainly not the usual teatime. Streed’s illustrations are dark, with sepia tones, giving the book an endearing old-timey and eerie feel. The narrative is broken up with close-up views of Alfred’s monster book, giving readers a firsthand perspective and a glimpse at some inventive monsters, including the soul-stealing Lantern Man. The monsters are creepy and might be scary to some children, but are not overly graphic in depiction making them slightly more accessible. For example, one looks like a black dog with glowing red eyes, which might not be as frightening as some images could be. The story itself is relatable and funny, as there are often adults who want children’s attention when they would much rather do something more personally enjoyable. VERDICT This is a wonderfully creative and silly story for readers who enjoy spooky and quirky tales and may be an early introduction to some future horror fans.
—School Library Journal


Alfred is happiest locked away in his study, where he can read his book of monsters. Care to take a peek? A turn of the page shows readers the spread Alfred, himself, is examining on Nixies. Sensitive youngsters should return to the shelves before this, perhaps for something charming like Jessie Sima’s Not Quite Narwhal (2017), because the slimy, black-ink creature staring from the page with acid-green eyes might not be their cup of tea. Speaking of which, Alfred finds few things more annoying than having his reading interrupted by his aunt calling him to tea, which is always—shudder—delightful. Over the next few days, Alfred gleefully reads about the beastly Black Shuck and the sinister Lantern Man and decides to jazz up his daily tea by inviting these three monsters to a tea party. Whether the event is a success is debatable—pan to Aunty slumped in an armchair—but it’s clear that Alfred had a terribly good time. And readers who go for mildly scary stories will, too.
—Booklist


Working in a minimalistic palette of browns and grays, Streed introduces a boy who, much to the chagrin of his proper, tea-loving aunt, loves reading about “terrible” monsters in his favorite book. As the book’s ragged, antiqued pages (and Alfred’s hands atop them) fill the spreads, readers encounter the monstrous characters: the cold-skinned, stream-dwelling Nixie; the shaggy, one-eyed Black Shuck; and the Lantern Man—a floating spirit with skeletal limbs who carries a sinister lantern (“the light of one thousand stolen souls”). After another “delightful” tea pushes Alfred too far (“I want MONSTERS!”), wordless panels show him racing to the graveyard to deliver an invitation to the monsters—who are not only very real but barge into the house for a wonderful, “terrible” tea time. Streed conveys a child’s love for frights while delivering a blend of droll humor and chilling creatures.
—Publishers Weekly

This feature require that you enable JavaScript in your browser.
END_OF_DOCUMENT_TOKEN_TO_BE_REPLACED

This feature require that you enable JavaScript in your browser.
END_OF_DOCUMENT_TOKEN_TO_BE_REPLACED

This feature require that you enable JavaScript in your browser.
END_OF_DOCUMENT_TOKEN_TO_BE_REPLACED