Sermons in Stone: The Stone Walls of New England and New York (Paperback) 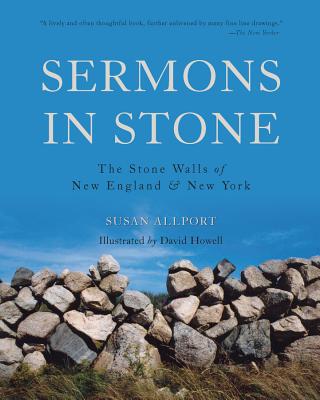 A well-written, fascinating contribution to the region's social and economic —Boston Magazine

What do we actually know about stone walls? about the people who built them, and why? Stone walls are not simply monuments to the skill of Yankee farmers. The historical record makes clear that many were built by slaves, Indians, indentured servants, and children. Sermons in Stone is the surprising and illuminating history of the walls, a story that begins in the Ice Age and that has been shaped by the fencing dilemmas of the nineteenth century, by conflicts between Native Americans and colonists over land use, by American waves of immigration and suburbanization. "Who would think that a history of that humble workaday structure, the stone wall, would be so full of the fascinating, the peculiar, the downright eccentric? But here it is, laid out in a sprightly style and beautifully illustrated by the ink drawings of David Howell." —Dallas Morning News

Susan Allport is an author of books on diverse topics in science, travel, and food. She and illustrator David Howell live with their family in Westchester County, New York.

This feature require that you enable JavaScript in your browser.
END_OF_DOCUMENT_TOKEN_TO_BE_REPLACED

This feature require that you enable JavaScript in your browser.
END_OF_DOCUMENT_TOKEN_TO_BE_REPLACED

This feature require that you enable JavaScript in your browser.
END_OF_DOCUMENT_TOKEN_TO_BE_REPLACED