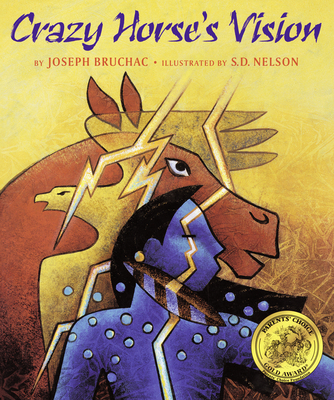 The true story of the great Sioux warrior who, as a young boy, defies tradition and seeks a vision on his own in hopes of saving his people.

Crazy Horse is among the best known Native American heroes. Yet many people do not know his boyhood name was Curly, inspired by his curly hair.

Curly was a leader even as a young boy, taming wild horses and hunting powerful buffalo. But all his bravery could not prepare him for the trouble he and the other Lakota Indians would face with the white settlers. Wanting to help his people after a fierce battle that mortally wounded Chief Conquering Bear, Curly defied traditional custom and risked his own life by running away, up to the hills, to seek a vision.

Renowned Abenaki author Joseph Bruchac tells a gripping and compelling story of how the dedicated young boy, Curly, grows into the brave warrior Crazy Horse. Sioux artist S.D. Nelson, with paintings inspired by the ledger book style of the Plains Indians, evokes the drama and tragedy of an important figure in American history.

Joseph Bruchac is among the most respected and widely published Native American authors, with over 100 titles in print, including the popular Keepers of the Earth series and Lee & Low's Killer of Enemies trilogy, which received a starred review from Kirkus Reviews. A Rockefeller Fellow and an NEA Poetry Writing Fellow, Bruchac has received numerous recognitions over his long-standing career; including the Native Writers' Circle of the Americas Lifetime Achievement Award. In addition to writing, Bruchac is an editor at Greenfield Review Press, a literary publishing house he co-founded with his wife. He lives in Greenfield Center, New York. To find out more about Joseph Bruchac, visit josephbruchac.com. S.D. Nelson collaborated with Joseph Bruchac as illustrator of Crazy Horse's Vision and Jim Thorpe's Bright Path. He is also the author and illustrator of many picture book stories inspired by the traditions of his Lakota heritage--including Gift Horse, winner of the Parents' Choice Award, and The Star People, an Oppenheim Gold Award winner. A former middle school art teacher, Nelson is now a full-time artist whose artwork appears on book jackets, greeting cards, and CD covers, and whose paintings are held in both private and public collections. He is of Lakota (Sioux) descent and lives with his wife in Chandler, Arizona. Visit him online at sdnelson.net.

This feature require that you enable JavaScript in your browser.
END_OF_DOCUMENT_TOKEN_TO_BE_REPLACED

This feature require that you enable JavaScript in your browser.
END_OF_DOCUMENT_TOKEN_TO_BE_REPLACED

This feature require that you enable JavaScript in your browser.
END_OF_DOCUMENT_TOKEN_TO_BE_REPLACED