Congressional Procedure: A Practical Guide to the Legislative Process in the U.S. Congress: The House of Representatives and Senate Explained (Paperback) 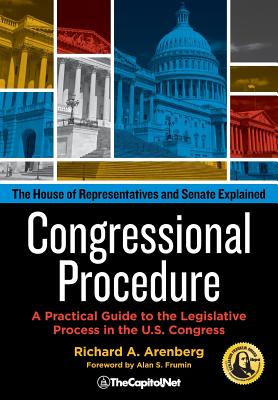 By Richard A. Arenberg, Alan S. Frumin (Foreword by)
Email or call for price.
usually available in 3-7 days
(This is a special order book which cannot be returned.)

"A clear explanation of the workings of the United States government that should be required reading for politically engaged Americans." -- KIRKUS

Congressional Procedure explains the legislative and congressional budget processes along with all aspects of Congress.

This comprehensive guide to Congress is ideal for anyone who wants to know how Congress really works, including federal executives, attorneys, lobbyists, media and public affairs staff, government affairs, policy and budget analysts, congressional office staff and students.

Each chapter concludes with Review Questions.

In Chapter 3, the work of Congressional committees is examined in greater detail: types of committees and their structures; subcommittees; power of the chairs of committees; hearings, markups and amendment procedure in committee; and the reporting of legislation to the House and Senate floor.

Chapters 4 and 5 follow the course of legislation through the respective chambers and some of the more arcane elements of House and Senate floor action.

Chapter 4 addresses some of the unique characteristics of the House including the central and crucial role played by the Rules Committee and the special rules it reports. Scheduling, consideration, amending, and passage of legislation through the House is described in detail.

Chapter 5 discusses the handling of legislation on the Senate floor, including unique Senate characteristics like the filibuster, the nuclear option, holds, and the filling of the amendment tree.

Chapter 6 explains the various procedures for resolving differences in legislation between the Senate and the House.

The budget process is addressed in Chapter 7, including appropriations and authorization procedures, the 1974 Budget and Impoundment Control Act and the key role it has played since its adoption, the use of the optional budget reconciliation process, and the somewhat complex but crucial Byrd Rule.

Chapter 8 concludes the detail and analysis of Congressional procedure with a number of processes that are not strictly legislative, including a number of Constitutional responsibilities given to Congress such as oversight and investigation and advice and consent, counting of Electoral College ballots, and impeachment.

The conclusion, Chapter 9, describes the way in which many of the procedures explained in this book are increasingly being used, and some would say abused, in both the House and the Senate.

This feature require that you enable JavaScript in your browser.
END_OF_DOCUMENT_TOKEN_TO_BE_REPLACED

This feature require that you enable JavaScript in your browser.
END_OF_DOCUMENT_TOKEN_TO_BE_REPLACED

This feature require that you enable JavaScript in your browser.
END_OF_DOCUMENT_TOKEN_TO_BE_REPLACED