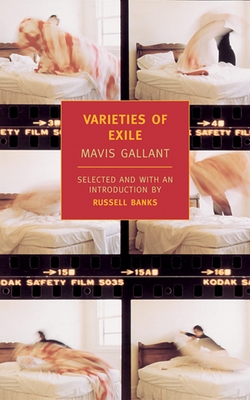 By Mavis Gallant, Russell Banks (Introduction by)
$16.95
Special Order - may be out of print

Mavis Gallant is the modern master of what Henry James called the international story, the fine-grained evocation of the quandaries of people who must make their way in the world without any place to call their own. The irreducible complexity of the very idea of home is especially at issue in the stories Gallant has written about Montreal, where she was born, although she has lived in Paris for more than half a century.

Varieties of Exile, Russell Banks's extensive new selection from Gallant's work, demonstrates anew the remarkable reach of this writer's singular art. Among its contents are three previously uncollected stories, as well as the celebrated semi-autobiographical sequence about Linnet Muir—stories that are wise, funny, and full of insight into the perils and promise of growing up and breaking loose.

Mavis Gallant was born in Montreal and worked as a journalist at the Montreal Standard before moving to Europe to devote herself to writing fiction. After traveling extensively she settled in Paris, where she still resides. She is the recipient of the 2002 Rea Award for the Short Story and the 2004 PEN/Nabokov Award for lifetime achievement. New York Review Books Classics has published previous collections of Gallant's stories, Paris Stories, selected and introduced by Michael Ondaatje (2002), and The Cost of Living.

“Often, her fiction drew its energy from contradictory qualities: her stories were minutely observed but also suspenseful, matter-of-fact but also fanciful, reportorial but also imaginative. They were broad-minded, and so felt real…it feels as concrete as anything you might read in the newspaper or see with your own eyes. Gallant had a rare gift: a solid imagination.” —The New Yorker

"Gallant’s subject is the comic opera of character….Before we know it she will have circled a person, captured a voice, revealed a whole manner of a life in the way a character avoids an issue or discusses a dress." —Michael Ondaatje

"Line by line, word by word, no one writes with more compression than Gallant. Great short stories are sometimes said to be as rich and as full as novels, but hers are as rich and full as encyclopedias." —Francine Prose, Harper’s

“One of the most brilliant story writers in the language, who deserves to be read as widely as her fellow Canadian Alice Munro. No one writes about brutish people like Gallant; she transforms the meanest human specimens into subjects of high fascination and sympathy, which makes her excellent reading for overheated festival subway commutes.” --Alexandra Schwartz, The New Yorker

This feature require that you enable JavaScript in your browser.
END_OF_DOCUMENT_TOKEN_TO_BE_REPLACED

This feature require that you enable JavaScript in your browser.
END_OF_DOCUMENT_TOKEN_TO_BE_REPLACED

This feature require that you enable JavaScript in your browser.
END_OF_DOCUMENT_TOKEN_TO_BE_REPLACED