We Have Only This Life to Live: The Selected Essays of Jean-Paul Sartre, 1939-1975 (Paperback) 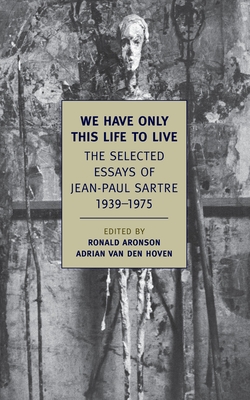 Jean-Paul Sartre was a man of staggering gifts, whose accomplishments as philosopher, novelist, playwright, biographer, and activist still command attention and inspire debate. Sartre’s restless intelligence may have found its most characteristic outlet in the open-ended form of the essay. For Sartre the essay was an essentially dramatic form, the record of an encounter, the framing of a choice. Whether writing about literature, art, politics, or his own life, he seizes our attention and drives us to grapple with the living issues that are at stake.

We Have Only This Life to Live is the first gathering of Sartre’s essays in English to draw on all ten volumes of Situations, the title under which Sartre collected his essays during his life, while also featuring previously uncollected work, including the reports Sartre filed during his 1945 trip to America. Here Sartre writes about Faulkner, Bataille, Giacometti, Fanon, the liberation of France, torture in Algeria, existentialism and Marxism, friends lost and found, and much else. We Have Only This Life to Live provides an indispensable, panoramic view of the world of Jean-Paul Sartre.

Jean-Paul Sartre (1905–1980) was a hugely influential French philosopher, novelist, playwright, and pamphleteer. In 1964 he declined the Nobel Prize for Literature. Among his most well-known works available in English are Nausea, Being and Nothingness, No Exit, Critique of Dialectical Reason, and The Words.

Ronald Aronson is the author of The Dialectics of Disaster, After Marxism, Camus and Sartre and  Living Without God. He teaches at Wayne State University.

Adrian van den Hoven is Professor Emeritus at the University of Windsor and founding Executive Editor of Sartre Studies International. He has translated Sartre, Camus, and other French writers, and is the author of several books about Sartre. He was twice elected President of the North American Sartre Society.

"Nothing disproves the ill-informed criticisms that philosophy is an obscure field better than a philosopher's writings on allegedly non-philosophical topics. This collection of essays from the existentialist philosopher counters such claims and attests to philosophy's continued relevance without explicitly setting that goal. Now-commonplace subjects, like New York City and jazz, in Sartre's hands become telling indications of the differences between American and European metropolitan lifestyles, their solitary versus communal tendencies."  —Publishers Weekly (starred review)

"For my generation [Sartre] has always been one of the great intellectual heroes of the twentieth century, a man whose insight and intellectual gifts were at the service of nearly every progressive cause of our time." —Edward Said

"One of the most brilliant and versatile writers as well as one of the most original thinkers of the twentieth century." —Times (London)

“Sartre minced no words, and his easy, natural way of writing enabled him to expound on diverse subjects. [Here] existentialism is clear and logical. Sartre wrote essays probing every political and social theme of his time, providing a remarkable view of history. His literary criticism should be the established standard for book reviewing.” —Kirkus Reviews

“Our teachers are those who bring us something radical and new, finding those ways of thinking that correspond to our modernity, our difficulties as well as our vague enthusiasms. That’s what Sartre was for us twenty-year-olds. Who except Sartre knew how to say anything new?” —Gilles Deleuze

This feature require that you enable JavaScript in your browser.
END_OF_DOCUMENT_TOKEN_TO_BE_REPLACED

This feature require that you enable JavaScript in your browser.
END_OF_DOCUMENT_TOKEN_TO_BE_REPLACED

This feature require that you enable JavaScript in your browser.
END_OF_DOCUMENT_TOKEN_TO_BE_REPLACED