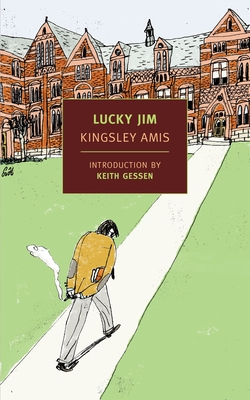 A hilarious satire about college life and high class manners, this is a classic of postwar English literature.

Regarded by many as the finest, and funniest, comic novel of the twentieth century, Lucky Jim remains as trenchant, withering, and eloquently misanthropic as when it first scandalized readers in 1954. This is the story of Jim Dixon, a hapless lecturer in medieval history at a provincial university who knows better than most that “there was no end to the ways in which nice things are nicer than nasty ones.” Kingsley Amis’s scabrous debut leads the reader through a gallery of emphatically English bores, cranks, frauds, and neurotics with whom Dixon must contend in one way or another in order to hold on to his cushy academic perch and win the girl of his fancy.

More than just a merciless satire of cloistered college life and stuffy postwar manners, Lucky Jim is an attack on the forces of boredom, whatever form they may take, and a work of art that at once distills and extends an entire tradition of English comic writing, from Fielding and Dickens through Wodehouse and Waugh. As Christopher Hitchens has written, “If you can picture Bertie or Jeeves being capable of actual malice, and simultaneously imagine Evelyn Waugh forgetting about original sin, you have the combination of innocence and experience that makes this short romp so imperishable.”

Keith Gessen is a founding editor of N+1 and the author of All the Sad Young Literary Men and A Terrible Country. Among his translations from the Russian are Voices from Chernobyl by Svetlana Alexievich and, with Anna Summers, There Once Lived a Woman Who Tried to Kill Her Neighbor’s Baby: Scary Fairy Tales by Ludmilla Petrushevskaya.

“Lucky Jim illustrates a crucial human difference between the little guy and the small man. And Dixon, like his creator, was no clown but a man of feeling after all.” – Christopher Hitchens

“Mr. Kingsley Amis is so talented, his observation is so keen, that you cannot fail to be convinced that the young men he so brilliantly describes truly represent the class with which his novel is concerned….They have no manners, and are woefully unable to deal with any social predicament. Their idea of a celebration is to go to a public bar and drink six beers. They are mean, malicious and envious….They are scum.” – W. Somerset Maugham

“’After Evelyn Waugh, what?’ this reviewer asked six years ago….The answer, already, is Kingsley Amis, the author of Lucky Jim….Satirical and sometimes farcical, they are derived from shrewd observation of contemporary British life, and they occasionally imply social morals….Lucky Jim is extremely funny. Everyone was much amused, and since it is also a kind of male Cinderella or Ugly Duckling story, it left its readers goo-humored and glowing.”  —Edmund Wilson, The New Yorker, 1956

“I was recommended [Kinglsey Amis’ Lucky Jim] when I was a teenager trying to figure out how to start reading 'serious' books. Great recommendation, because on the surface it’s nothing of the sort, but it is brilliant.” —Hugh Dancy, T: The New York Times Style Magazine

“Remarkable for its relentless skewering of artifice and pretension, Lucky Jim also contains some of the finest comic set pieces in the language.” —Olivia Laing, The Observer

“Remarkably, Lucky Jim is as fresh and surprising today as it was in 1954. It is part of the landscape, and it defines academia in the eyes of much of the world as does no other book, yet if you are coming to it for the first time you will feel, as you glide happily through its pages, that you are traveling in a place where no one else has ever been. If you haven’t yet done so, you must.” —Jonathan Yardley, The Washington Post

This feature require that you enable JavaScript in your browser.
END_OF_DOCUMENT_TOKEN_TO_BE_REPLACED

This feature require that you enable JavaScript in your browser.
END_OF_DOCUMENT_TOKEN_TO_BE_REPLACED

This feature require that you enable JavaScript in your browser.
END_OF_DOCUMENT_TOKEN_TO_BE_REPLACED