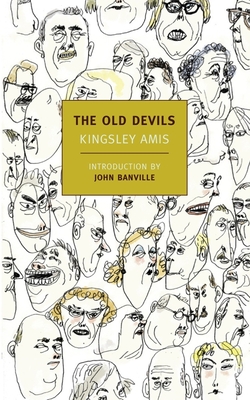 Unexpectedly Alun Weaver, television personality and man-of-letters, and his beguiling wife Rhiannon decide to leave England and return home to Wales. Once there they reunite with their old friends, a hard-drinking group of Welsh married couples, reawakening old friendships and romances.

Winner of the Booker Prize in 1986, The Old Devils is Kingsley Amis at his sardonic best, only this time he mixes in a lot of tenderness and compassion with witty dialogue and humor. Also enjoyable are his colorful and poignant descriptions of Wales.

A pub gathering of elderly married couples devolves into mischief in this “sharp and funny” British comedy about marriage, aging, and friendship (The Washington Post)

Age has done everything except mellow the characters in Kingsley Amis’s The Old Devils, which turns its humane and ironic gaze on a group of Welsh married couples who have been spending their golden years—when “all of a sudden the evening starts starting after breakfast”—nattering, complaining, reminiscing, and, above all, drinking. This more or less orderly social world is thrown off-kilter, however, when two old friends unexpectedly return from England: Alun Weaver, now a celebrated man of Welsh letters, and his entrancing wife, Rhiannon. Long-dormant rivalries and romances are rudely awakened, as life at the Bible and Crown, the local pub, is changed irrevocably.

Considered by Martin Amis to be Kingsley Amis’s greatest achievement—a book that “stands comparison with any English novel of the [twentieth] century”—The Old Devils confronts the attrition of ageing with rare candor, sympathy, and moral intelligence.

John Banville was born in Wexford, Ireland, in 1945. He is the author of many novels, including The Book of Evidence, The Untouchable, Eclipse, The Sea (winner of the Man Booker Prize), and most recently, Ancient Light. As Benjamin Black he has written six crime novels, including the recently published Vengeance.

“Kingsley Amis’s most ambitious book is neither a sendup nor an exercise in some established genre. It sets forth a large cast of characters rendered in depth as well as on the surface. The Old Devils is also Mr. Amis’s most inclusive novel, encompassing kinds of feelings and tone that move from sardonic gloom to lyric tenderness.”
—The New York Times

“The talk is also exceedingly sharp and funny, and it brings the characters to life as only pungent dialogue can. His prose is as tart as ever, which is of course good news, but the softening effect of his feelings for his old devils is even more welcome. More than in any of his previous novels, Kingsley Amis has allowed himself to show a bit of heart; it becomes him.”
—Jonathan Yardley, The Washington Post

The book is, of course, highly comic in parts, but it is not a cosy read. The comedy has a crematorium whiff, dealing with such unmentionable topics as death, old age, hate, the ghastliness of marriages, the awfulness of the Welsh and the decay of the flesh.”
—The Times, London

“For long time admirers of the Amis of Lucky Jim and after, The Old Devils is welcomed evidence that the master remains masterful, able now to conjoin the mischievous with the mellow. As always, he is an insightful guide through the terrain where what is said is not meant and what is felt is not said, but where much of life is lived.”
—The Los Angeles Times

“The old, robust masculine tradition of British comedy from Fielding and Smollett continues in our own vernacular.”
—V.S. Prichett, The New Yorker

This feature require that you enable JavaScript in your browser.
END_OF_DOCUMENT_TOKEN_TO_BE_REPLACED

This feature require that you enable JavaScript in your browser.
END_OF_DOCUMENT_TOKEN_TO_BE_REPLACED

This feature require that you enable JavaScript in your browser.
END_OF_DOCUMENT_TOKEN_TO_BE_REPLACED